President Trump has nominated Judy Shelton as one of the candidates for the open seats on the Federal Reserve’s Board of Governors. While Shelton is a controversial nominee, she is less problematical than the previous two, Herman Cain and Stephen Moore.

While I certainly understand the reasoning behind a gold-backed currency, which is a way to control inflation, I have some difficult questions for Shelton and other supporters of a gold standard. 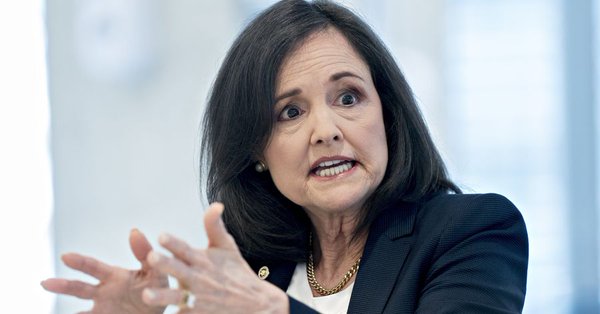 The best way to do that is to adopt a global gold standard. The Bretton Woods system was a gold exchange standard, not a gold standard. Only the U.S. was required to convert its currency into gold at a fixed rate, and only foreign central banks were allowed the privilege of redemption. If you corrected for those two flaws–by requiring all countries to maintain convertibility and by granting every individual the right to redeem–you would be back to the classic international gold standard. A modern version would provide the world with a common currency anchored by gold and redeem the promise of global capitalism.

At the height of the Great Financial Crisis in September 2008, Shelton reiterated her views in a WSJ op-ed. First, she blamed the fiat currency system as a cause of the GFC:

Whatever well-intentioned reasons existed in 1913 for creating the Federal Reserve — to provide an elastic currency to soften the blow of economic contractions caused by “irrational exuberance” (and that will never be conquered, so long as humans have aspirations) — one would be hard-pressed to say that the financial fallout from this latest money meltdown will have less damaging consequences for the average person than would have been incurred under a gold standard.

Moreover, the mission of the central bank has been greatly compromised. Can anyone have faith that Fed policy decisions going into the future will deliver more reliable money? Don’t we already know in our bones that the cost of this latest financial nightmare will be born by all of us who store the value of our labor and measure our purchasing power in the form of dollars? As John Maynard Keynes, the famous British economist, observed in his “Tract on Monetary Reform,” published in 1923:

She went on to endorse the idea of a bimetallic backed currency:

It is time to take on the task of establishing a new foundation for international economic relations and financial relations — one dedicated to open markets and based on monetary integrity. Every country is responsible for anchoring its own currency to the universal reserve asset, and every citizen has the right to convert the national currency into the universal reserve asset.

That’s how a gold standard works. A bimetallic system, linked to silver and gold, works the same way. In either case the money is fixed to a common anchor — and thus automatically functions as a common currency to serve the needs of legitimate producers and consumers throughout the world.

How would such an approach cure financial market ills? Nothing can rescue humans from occasionally making bad choices or succumbing to herding instincts. But on the same principle as democracy and free elections, embedded in the aggregate judgment of individuals over time is a wisdom that outperforms the most ostensibly savvy administrator. Sound money would go a long way toward eliminating the distortions that pervert financial decisions and credit allocations. Price signals do matter; if they don’t, then free markets don’t matter, and capitalism doesn’t work. In which case, let government dictate demand and regulate supply.

No, we need to fix the money. Literally.

The idea is if you fix the growth rate of M, or money, to the natural real growth rate of the economy, you can naturally control inflation by limiting the ability of governments to borrow and spend. How do you manage the growth of the money supply (gold) in a way that is consistent with the underlying economy? At the extreme, what does the central bank do if the economy encounters an unexpected shock?

Frances Woolley, writing in Worthwhile Canadian Initiative, proposed such a shock in the fictional land of The Hobbit:

Smaug the dragon is typically viewed as a fiscal phenomenon, depressing economic activity by burning woods and fields, killing warriors, eating young maidens, and creating general waste and destruction. Yet peoples – whether elvish, dwarvish, or human – have considerable capacity to rebuild. Why did the coming of Smaug lead to a prolonged downturn in economic activity, rather than a short downturn followed by a period of rebuilding and growth?

The full economic impact of Smaug can only be understood by recognizing that the dragon’s arrival resulted in a severe monetary shock. On the left is shown Smaug’s hoard. On the right, for purposes of comparison, are the gold reserves of the Bank of England. It is clear from a simple inspection of these two figures that the amount of gold coinage Smaug withdrew from circulation represents a significant volume of currency. This would, inevitably, lead to deflation and depressed economic activity. Bank-of-england-bank-vault

Woolley made a good point. What happens if an unexpected shock dramatically changed M, or the money supply. Would the economy collapse from deflation? How should central bankers, if they exist, act under such circumstances?

While the world of The Hobbit is fictional, the reverse did occur in real life at one point in Europe. When the Spanish brought their looted Incan and Mayan gold from the New World into the Old World, it sparked an era of inflation.

Milton Friedman was right in that respect. inflation is a monetary phenomena.

How do gold standard supporters intend to control the supply of gold? Presumably, you would want the  supply to rise at roughly the natural real growth rate of the economy. How do you do that?

The same question could be posed to crypto-currency supporters. If a crypto-currency is supposed to be an alternative currency to the fiat currencies, how do you control its growth rate?

What about the fractional banking system?

Another issue many hard money supporters have trouble with is the idea of the fractional banking system.

Supposing you had $100 today, and you put your $100 into a bank. While the bank makes a ledger entry which states that it is holding that $100 for you, and it owes you $100, it actually puts that money to work by lending it out. Supposing that the bank pays you 1% on your $100 deposit, but it lends it out at 2% and makes a spread of 1% ot its loan.

For the purpose of financial prudence, the bank doesn’t lend out the entire $100, but lends out 90%,or $90. Lending $90 to borrower B “creates” $90 out of thin air from the leverage effects. Borrower B then deposits the $90 into a bank, and that bank lends out 90% of it, which is $81, which creates even more money out of thin air. That’s the magic of fractional banking, and that’s how the credit system works.

Here is the question for Shelton and other gold standard backers. Will you entirely do away with the fractional banking system, because it creates money out of thin air? The elimination of fractional banking under a PQ = MV framework means that M would fall dramatically, which would collapse the economy.

If I lend you 1 troy oz. of gold, what is the mechanism for determining the interest rate, which is to be paid in coinage?

In this article, I propose a reform that would bring the power of market forces and competition to bear on the challenge of providing sound money while still giving government a principled role in the monetary system.

My recommendation is to introduce a special class of medium term U.S. government debt obligations to be designated “Treasury Trust Bonds (TTBs).” These zero coupon bonds would grant the holder the right to redeem in either gold or dollars. This article provides details on how TTBs would be structured and how they might spur a transition toward new global monetary arrangements.

The issuance of TTBs would fit into a pro-growth economic agenda based on limited government, low taxes, rule of law, and global free trade. Linking the dollar to gold through TTBs would be a bold step toward completing the original economic agenda laid out by President Ronald Reagan, which called for a stable dollar. Consider it a “trust-but-verify” approach to sound money.

In that paper, she went called for the establishment of a Universal Gold Reserve Bank:

The Universal Gold Reserve Bank (UGRB) would have the potential to become a sort of global monetary authority. It would function as a central bank, not in a regulatory sense, but as the initiator of open market operations based on the global reserve asset. To the extent a wide array of nations opted to combine their currencies into mutually binding gold-linked contracts (likely in accordance with contributed collateral or private market swap arrangements), a new means of providing base money would be introduced. The UGRB
would stand ready to buy or sell its own financial obligation—an instrument pegging the value of the “uni,” let’s call it, to a specific weight of gold. The central banks of participating countries would essentially serve as primary dealers for UGRB securities.

UGRB would be a global central bank: 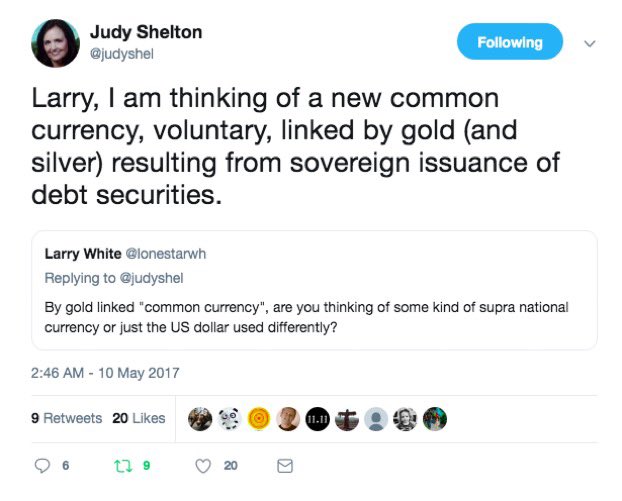 Her UGRB proposal sounds like a variation of the Growth and Stupidity Stability Pact that supports the eurozone common currency. Since the US federal government is running enormous deficits, would a UGRB force the US to change its fiscal policy by running primary surpluses, in the manner of the adjustments forced on Greece by the European Central Bank? That proposal does not appear to be very MAGA friendly.

Maybe I am dense, but I just don’t understand the basic mechanics of a gold standard.

3 thoughts on “Questions for Judy Shelton and gold standard supporters”