Some all-weather industries to consider – Humble Student of the Markets

Mid-week market update: The headlines look dire, and so does the market action. Relative performance analysis shows that defensive sectors have become the leadership, but as the October to December selloff shows, they are coincidental indicators and offer no predictive power as to future market direction. 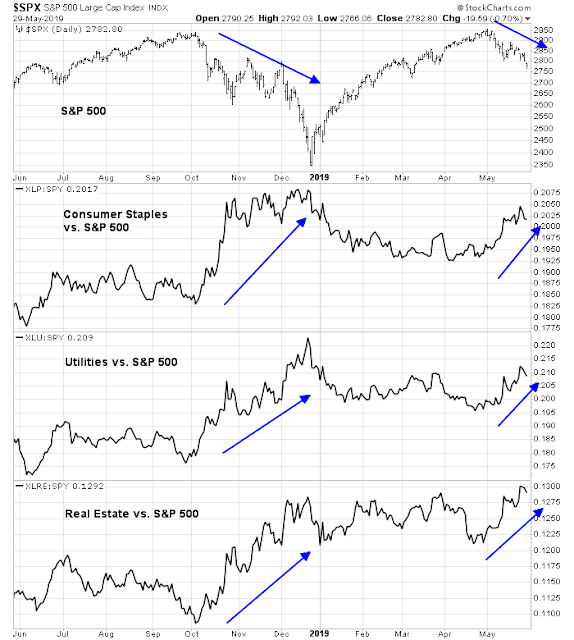 What should you do? Today, I look through the market turmoil and offer some suggestions of industry groups that appear to stand up well independent of their beta characteristics. These group have the potential to be the leaders in the next upturn.

Here are some potential leadership candidates to consider. We all know that Healthcare stocks were spooked by the prospect of Medicate-for-all in April. The market forgot all about that scare when prices pulled back and the sector began to outperform. Instead of just buying the sector, how about the Biotech stocks? Biotechnology stocks have the defensive characteristics of Healthcare and the high beta characteristics when the market recovers. Right now, they are performing roughly in line with the market, and they are not lagging in the with that other high octane stocks are. 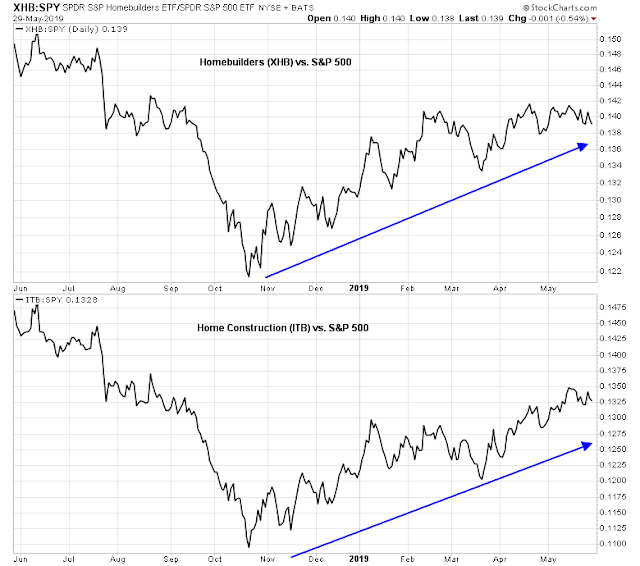 A diversifying group are the Aerospace and Defense stocks. While these stocks have performed in a choppy fashion, their short-term returns will depend on changes in geopolitical premium. They represent a diversifying element, which, in measured amounts, can steady overall portfolio performance.

Another possible diversifying element for US equity portfolios might be Mexican stocks. While the trade dispute with China is driving production out of China, the production is not returning to the US, but into Southeast Asian countries, and Mexico. The likely ratification of NAFTA 2.0 by all three countries could also provide a boost to Mexican stocks.

Lastly, here is a more speculative group to consider. Chris Verrone of Strategas appeared on CNBC Fast Money and stated that the semiconductor stocks could see a turnaround. Verrone cited support at about the 200 dma, off-the-charts put buying indicating crowded bearish sentiment, and washed-out internals as reasoning for his bullishness.

From a technical perspective, the SPX has breached a key technical support level at 2800, which is a bearish warning, but it is very oversold.

There is something for both bulls and bears. For the bulls, the breach of support is occurring even as the market exhibits a positive RSI divergence, and the VIX failing to make a new high. The index is also testing its 200 day moving average, and recent initial tests have resolved with brief bounces. On the other hand, the next Fibonacci support of the support breach can be found at about 2722. In addition, the support breach could be interpreted as the break of a head and shoulders neckline with a measured downside target of ~2650. 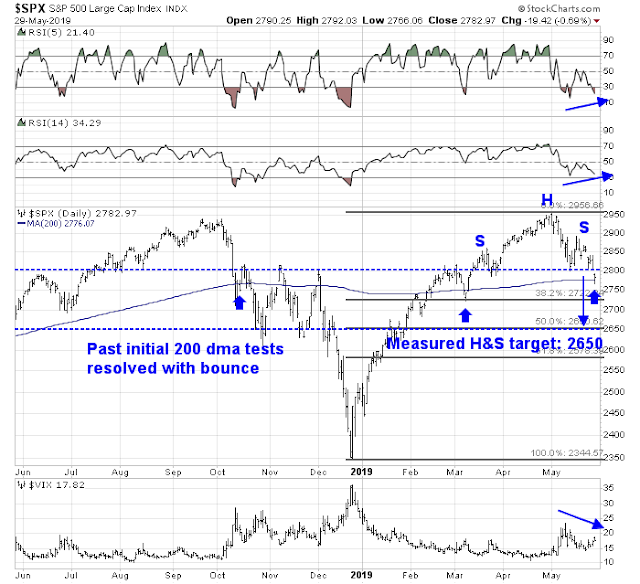 The stock market is oversold on based on short-term (1-2) day breadth indicators from Index Indicators as of Tuesday night’s close. Readings are likely to be even more oversold in light of today`s losses. 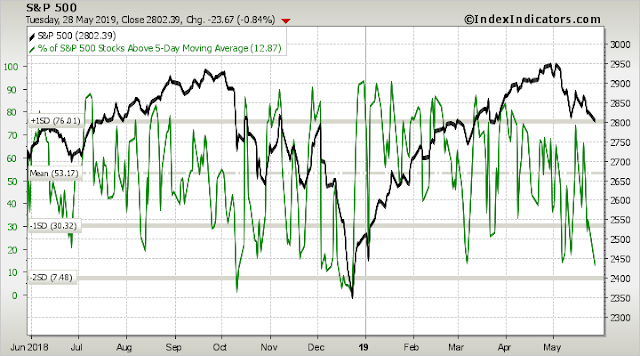 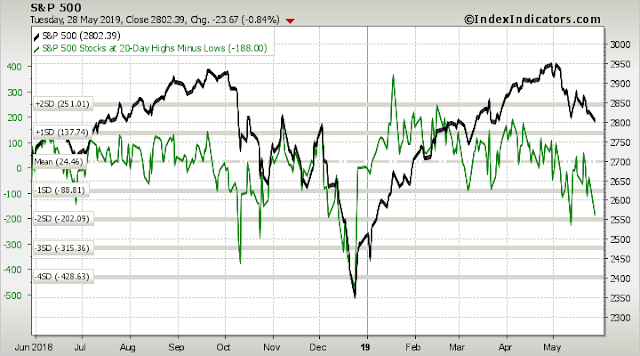 Some readers alerted me to analysis from Bespoke. When stocks are down 4% and bonds are up 4% in a month, the last three days tends to see a reversal as institutions rebalance back to their benchmark weights.

My interpretation of these conditions is the market is due for a minor relief rally, but it will be range-bound, choppy, and headline driven until the Trump-Xi meeting at the G20 in Japan, which incidentally has not been confirmed.

My inner investors is maintaining his equity allocation at his investment policy weight. My inner trader remains bullishly positioned. Your risk preferences and pain thresholds are not the same as mine, and it may be appropriate for you to either reduce or even flatten your trading positions in light of these risks.

2 thoughts on “Some all-weather industries to consider”