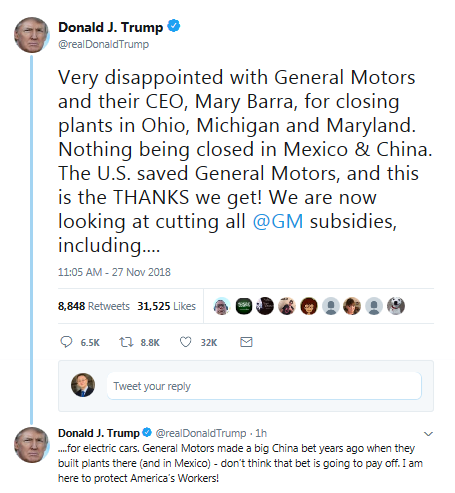 I feel his pain. Indeed, wage growth in Old Economy industries have been stagnant for quite some time. 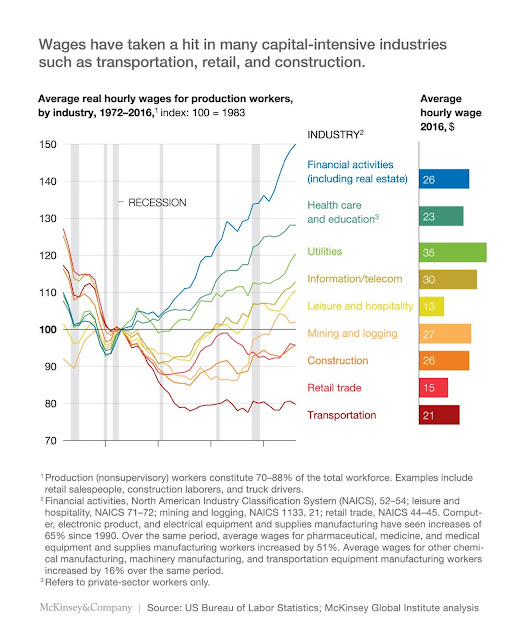 The WSJ wrote an editorial in response:

President Trump believes he can command markets like King Canute thought he could the tides. But General Motors has again exposed the inability of any politician to arrest the changes in technology and consumer tastes roiling the auto industry.

I agree. Trump’s 1950’s framework for analyzing the economy has become outdated. The world is moving on, and investors should move on too.

The death of P/B

Notwithstanding the pros and cons of the decisions of GM management, here is the message from the market. Jim O’Shaughnessy of O’Shaughness Asset Management highlighted the long-term return differential between the Price to Book factor (red line) and other cash flow factors. Simply put, P/B doesn’t work anymore as a stock selection technique anymore. 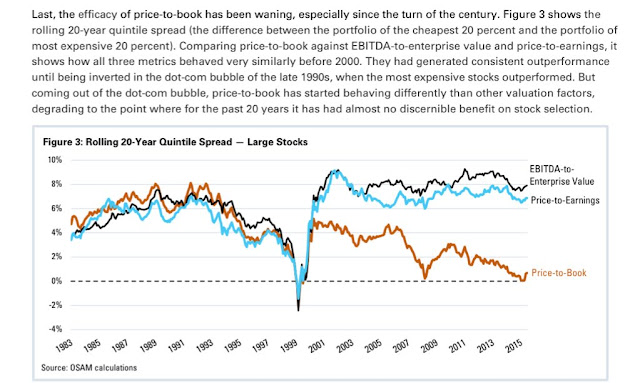 In the days of our parents and grandparents, investors analyzed companies based on the returns of corporate assets, and how hard management sweated those assets. Those days of companies of using the classic economic inputs of capital, labor, and rents (land) is becoming obsolete, as evidenced by the failure of the P/B factor in stock selection.

Here is how the Morgan Stanley auto analyst reacted to the GM decision:

The next morning, as we hosted joint investor meetings with HK-based clients with my European colleague Harald Hendrikse, we agreed that GM management has accomplished something truly unprecedented: elimination of significant excess capacity from a position of strength before the market downturn. We also agreed that the read-across to the global auto sector is highly significant.

GM is conducting a masterclass in how to manage a portfolio of increasingly obsolete businesses. Mary Barra’s leadership strength and strategic acumen are proving to be a valuable asset to shareholders. The GM team’s combination of awareness and action (vision and execution) is an example for OEMs globally that must guide these extremely large, complex, and frequently culturally entrenched organizations into new markets while dismantling parts of the business with potentially negative terminal values.

The world has changed, and building plants that employ production workers may not be the best way to compete for many companies in today’s economy.

As another example of how the world is changing, consider Warren Buffett, the legendary investor who spent a lifetime profiting from buying dull little businesses at reasonable prices. Adam Seessel explained in a recent Fortune article how Buffett has changed his stripes [emphasis added]:

Buffett began his career nearly 70 years ago by investing in drab, beaten-up companies trading for less than the liquidation value of their assets—that’s how he came to own Berkshire Hathaway, a rundown New England textile mill that became the platform for his investment empire. Buffett later shifted his focus to branded companies that could earn good returns and also to insurance companies, which were boring but generated lots of cash he could reinvest. Consumer products giants like Coca-Cola, insurers like Geico—reliable, knowable, and familiar—that’s what Buffett has favored for decades, and that’s what for decades his followers have too.

Now, in front of roughly 40,000 shareholders and fans, he was intimating that we should become familiar with a new reality: The world was changing, and the tech companies that value investors used to haughtily dismiss were here to stay—and were immensely valuable.

“The four largest companies today by market value do not need any net tangible assets,” he said. “They are not like AT&T, GM, or Exxon Mobil, requiring lots of capital to produce earnings. We have become an asset-light economy.” Buffett went on to say that Berkshire had erred by not buying Alphabet, parent of Google. He also discussed his position in Apple, which he began buying in early 2016. At roughly $50 billion, that Apple stake represents Buffett’s single largest holding—by a factor of two.

At the cocktail parties afterward, however, all the talk I heard was about insurance companies—traditional value plays, and the very kind of mature, capital-intensive businesses that Buffett had just said were receding in the rearview mirror. As a professional money manager and a Berkshire shareholder myself, it struck me: Had anyone heard their guru suggesting that they look forward rather than behind?

Buffett and his partner Charlie Munger became wildly successful by buying good companies with “moats”, or strong competitive positions, at reasonable prices. He avoided technology companies because he believed that their competitive moat were, at best, fleeting:

With the help of his partner Charlie Munger, Buffett studied and came to deeply understand this ecosystem—for that’s what it was, an ecosystem, even though there was no such term at the time. Over the next several decades, he and Munger engaged in a series of lucrative investments in branded companies and the television networks and advertising agencies that enabled them. While ­Graham’s cigar-butt investing remained a staple of his trade, Buffett understood that the big money lay elsewhere. As he wrote in 1967, “Although I consider myself to be primarily in the quantitative school, the really sensational ideas I have had over the years have been heavily weighted toward the qualitative side, where I have had a ‘high-probability insight.’ This is what causes the cash register to ­really sing.”

Thus was born what Chris Begg, CEO of Essex, Mass., money manager East Coast Asset Management, calls Value 2.0: finding a superior business and paying a reasonable price for it. The margin of safety lies not in the tangible assets but rather in the sustainability of the business itself. Key to this was the “high-probability insight”—that the company was so dominant, its future so stable, that the multiple one paid in terms of current earnings would not only hold but perhaps also expand. Revolutionary though the insight was at the time, to Buffett this was just math: The more assured the profits in the future, the higher the price you could pay today.

This explains why for decades Buffett avoided technology stocks. There was growth in tech, for sure, but there was little certainty. Things changed too quickly; every boom was accompanied by a bust. In the midst of such flux, who could find a high-probability insight? “I know as much about semiconductors or integrated circuits as I do of the mating habits of the chrzaszcz,” Buffett wrote in 1967, referring to an obscure Polish beetle. Thirty years later, writing to a friend who recommended that he look at Microsoft, Buffett said that while it appeared the company had a long runway of protected growth, “to calibrate whether my certainty is 80% or 55% … for a 20-year run would be folly.”

Here is how Buffett changed his mind on Apple, the platform company, which now comprises about one-quarter of Berkshire’s portfolio:

Now, however, Apple is Buffett’s largest investment. Indeed, it’s more than double the value of his No. 2 holding, old-economy stalwart Bank of America.

Why? Not because Buffett has changed. The world has.

And quite suddenly: Ten years ago, the top four companies in the world by market capitalization were Exxon Mobil, PetroChina, General Electric, and Gazprom—three energy companies and an industrial conglomerate. Now they are all “tech”—Apple, Amazon, Microsoft, and Alphabet—but not in the same way that semiconductors and integrated circuits are tech. These businesses, in fact, have much more in common with the durable, dominant consumer franchises of the postwar period. Their products and services are woven into the everyday fabric of the lives of billions of people. Thanks to daily usage and good, old-fashioned human habit, this interweaving will only deepen with the passage of time.

Explaining his Apple investment to CNBC, Buffett recalled making such a connection while taking his great-grandchildren and their friends to Dairy Queen; they were so immersed in their iPhones that it was difficult to find out what kind of ice cream they wanted.

Buffett began to understand how platform companies like Apple, Google, and Amazon were breaching the competitive moat of the old economy companies that Berkshire once invested in:

As these platform companies create billions in value, they are simultaneously undermining the postwar ecosystem that Buffett has understood and profited from. Entire swaths of the economy are now at risk, and investors would do well not only to consider Value 3.0 prospectively but also to give some thought to what might be vulnerable in their Value 2.0 portfolios.

Some of these risks, such as those facing retail, are obvious (RIP, Sears). More important, what might be called the Media-­Consumer Products Industrial Complex is slowly but surely withering away. As recently as 20 years ago, big brands could use network television to reach millions of Americans who tuned in simultaneously to watch shows like Friends and Home Improvement. Then came specialized cable networks, which turned broadcasting into narrowcasting. Now Google and Facebook can target advertising to a single individual, which means that in a little more than a generation we have gone from broadcasting to narrowcasting to mono-casting.

As a result, the network effects of the TV ecosystem are largely defunct. This has dangerous implications not only for legacy media companies but also for all the brands that thrived in it. Millennials, now the largest demographic in the U.S., are tuning out both ad-based television and megabrands. Johnson & Johnson’s baby products, for example, including its iconic No More Tears shampoo, have lost more than 10 points of market share in the last five years—an astonishingly sharp shift in a once terrarium-like category. Meanwhile, Amazon and other Internet retailers have introduced price transparency and frictionless choice. Americans are also becoming more health conscious and more locally oriented, trends that favor niche brands. Even Narragansett beer is making a comeback. With volume growth, pricing power, and, above all, the hold these brands once had on us all in doubt, it’s appropriate to ask: What’s the fair price for a consumer “franchise”?

Investors like O’Shaughnessy understand how the world is changing. So does Warren Buffett. Does Trump understand the key drivers of a long-term sustainable competitive advantage, or will he continue to look in the rear-view mirror and focus on the old economic models?

For the last word, I conclude with the WSJ editorial from last Wednesday:

Mr. Trump and Democrats seem to believe that with the right mix of tariffs and managed trade they can return to a U.S. economy built on steel and autos. This is the logic behind the Administration stipulating in its new trade agreement with Mexico and Canada that 40% to 45% of a vehicle’s value must consist of parts made by workers earning at least $16 an hour.

But an economy doesn’t run on nostalgia. U.S. auto makers don’t fear the new wage mandate because engineering performed by higher-skilled U.S. employees accounts for ever-more of a vehicle’s value. GM could soon become as much a tech company as a manufacturer. Amid a strong economy, most laid-off GM employees should find work. GM may also decide to retool idled factories to produce trucks as Fiat Chrysler has with a plant in Michigan.