There has been a lot of hand wringing about the rising level of protectionism in the US and around the world. Let’s take an alternative view to perform our analysis. Imagine an alternative universe, where Donald Trump did not secure the GOP nomination in 2016, but another Republican went on to win the election. I am going to make the bold assertion that trade tensions would have risen in any case. 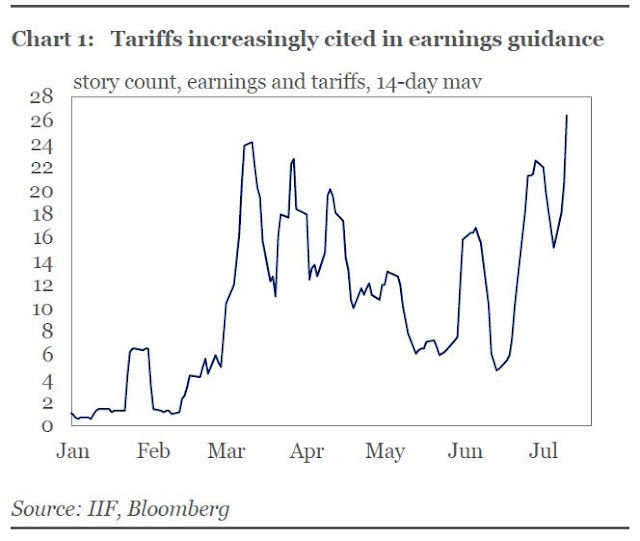 There are two reasons for my conclusion. First, globalization has stalled, and the low hanging fruit from globalization and globalized supply chains has mostly been harvested. In addition, a Republican President would have enacted a tax cut, and the resulting fiscal stimulus would have created a positive growth differential with the rest of the world and pushed up the USD. The combination of shrinking benefits from globalization and a rising exchange rate would inevitably heighten trade tensions.

Credit Suisse recently presented analysis indicating that the growth in global trade has flattened out. Global trade had been rising steadily since 1960, but growth has stalled since the Great Financial Crisis. 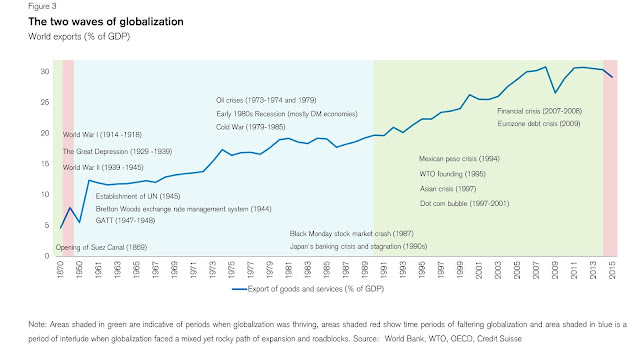 The UN Conference on Trade and Development also presented a study concluding that stagnation in the development of global value chains, as measured by foreign value added share in exports (FVA) that began in 2012, has continued. At the same time domestic value added (DVA) has been climbing during the same period. 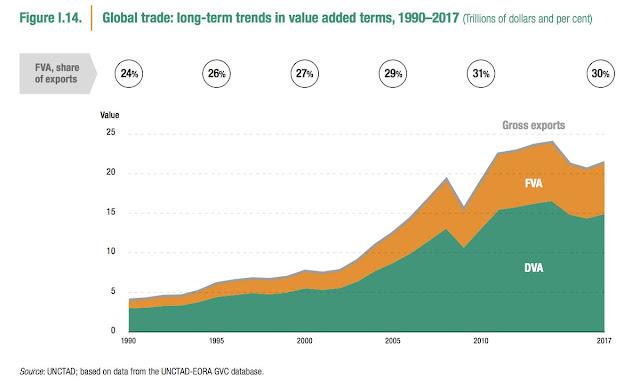 In short, the low hanging fruit from globalization and global supply chains has been harvested.

Trump has governed very much like a run-of-the-mill Republican in his first year in office. A recent study published at VOX used a “synthetic control method” to replicate how the American economy would have performed without Trump. This technique was used to measure the effects of one-time events such as German reunification, and the costs of Brexit. The study found that there has been no Trump effect on the economy.

Now let’s take that exercise a little further and imagine that another Republican had won the White House, and he had the cooperation of a friendly Congress. Historically, the priority of every GOP led administration has been tax cuts. Trump`s tax cut plan is therefore no surprise.

What is unusual about the current round of tax cuts is that it was enacted during a period of boom. In the past, budget deficits have risen in lockstep with unemployment. This time, Trump chose to enact a round of fiscal stimulus while the economy was firing on all cylinders. 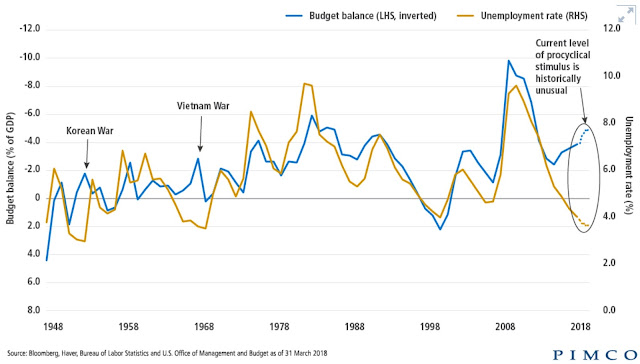 According to CBO, the deficit this year will be $804 billion and will rise to $981 billion next year and $1 trillion in 2020. CBO then projects that it will keep rising through the end of the 10-year projection window until it hits $1.5 trillion in fiscal 2028.

These projections are based on current law, which says that many of the tax cuts enacted in 2017 expire as the Tax Cuts and Jobs Act requires. If, as many expect, the law is changed so that none or only some of the provisions are allowed to expire, the revenue loss will be even greater and the deficits even larger.

CBO’s projections are also based on solid economic growth. Although CBO’s forecast is less rosy than what the Trump administration used in its budget, it still assumes that what is already the longest economic expansion in U.S. history will last another 10 years. Slower economic growth or a downturn will obviously increase the deficit even further.

As a result, CBO’s already-unprecedented projected trillion dollar-plus deficits should be considered as the best-case scenario. It’s actually more likely that the deficit will reach $1 trillion at least a year earlier in 2019, that is, next year.

While the deficit hawks may bemoan the projections of runaway debt, would the outcome have been significantly different under any other Republican administration? Tax cuts are part of the GOP’s DNA. Any other Republican would have passed a tax cut in some other shape or form. As Vice President Dick Cheney famously said in 2004, “Ronald Reagan proved that deficits don’t matter.”

In 2008 and 2009, those advocating more aggressive fiscal policy, including in the US, including the Federal Reserve, were defeated on political and ideological grounds. “A debt crisis cannot be resolved by issuing more debt,” went a popular refrain. Fast forward a decade and the fiscal stimulus that is being provided in the form of tax cuts and spending cuts are larger than in 2008-2009.

The last time the US pursued such a policy mix on anywhere near this magnitude was in the early 1980s. The US ended up sucking in so much of the world’s saving that it led to cries of relief. The dollar’s recovery from the 1970s slump began generating large trade deficits, chronic current account deficits, and a protectionist backlash. In September 1985, the G5 met at the Plaza Hotel in New York and agreed on sustained coordinated intervention to drive the dollar lower.

The Reagan stimulus drove up the budget deficit, but at the same time it raised the growth differential between the US (red line) and the rest of the world (blue line). The positive growth differential put upward pressure on the USD (black line), which made US exports less competitive, and raised trade tensions. 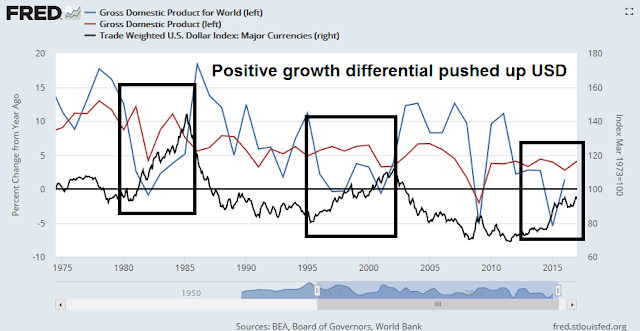 If the Republicans of our alternative universe enacted a tax cut and fiscal stimulus plan in 2017; economic growth would have surged from the Keynesian stimulus; the USD would have inevitably risen and raised trade tensions. The difference in trade tension between Trump and any other GOP White House is only a matter of degree.

How Trump is different

Here is where Trump is philosophically different from other GOP presidents. While most Republicans are free traders, Trump is the opposite in his thinking on trade. The current occupant of the White House has sought to reverse much of the effects of globalization of the last few decades.

We know who won and who lost from the era of globalization from Branko Milanovic’s well-known elephant chart. This chart depicts the income growth across global income percentiles for the period 1988 to 2008. The winners were the middle class in the emerging economies, as they benefited from rising incomes as companies offshored production, and the very rich, who engineered globalization. The losers were the inhabitants of the subsistence economies, because their economies were too undeveloped to benefit from the globalization wave, and the middle class in the developed economies, who saw stagnant real income growth as jobs got offshored.

If Trump were to be successful in his trade initiatives, what would the effects be on markets and the global economy?

Let’s return to the elephant chart. Trump’s objective in raising tariffs is to force manufacturing back to US shores. By reversing the globalization effect, the winners would be the middle class of the developed economies, such as the US, and the losers would be the emerging markets. 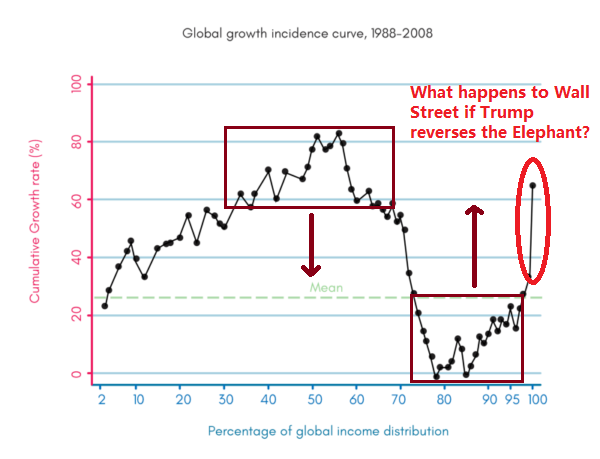 For investors, this brings up a key question. While emerging market asset prices are understandably likely to deflate under a Trump program, what happens to Wall Street? US stock prices were big winners under globalization. If regulatory changes forced manufacturing back inside the US, labor costs would rise, and margins would fall. Moreover, global trade would decline, and so would sales growth. While some of those negatives would be offset by higher American household income and spending power, the likely net effect would be lower earnings growth, and falling P/E multiples.

Bottom line, Trump’s trade policies would be bearish for stock prices. As to whether the outcome is politically desirable, I leave that conclusion up to the reader. That answer is well beyond my pay grade. In these pages, I only analyze markets.