Be careful what you wish for: Catalan independence edition – Humble Student of the Markets

The situation in Catalonia is a mess. Catalan frustrations are understandable. The region is the most prosperous of all in Spain, and shares similar characteristics as norther Italy to the rest of Italy, or North Rhine-Westphia and Bavaria to Germany. 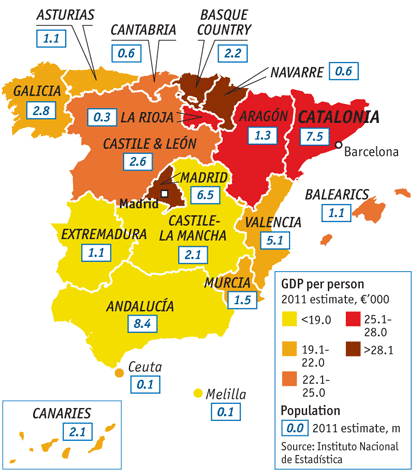 Here at Humble Student of the Markets, we try not to take political positions, but we stand in principle against the suppression of democracy. However, the independence referendum was ruled to be unconstitutional, but the heavy-handed reaction of the Rajoy government did not help matters.

Where do we stand now?

King Filipe IV has condemned the vote, as he has taken the position that it is unconstitutional. Catalan President Carles Puigdemont is offering mediated talks, but threatened to declare independence perhaps as soon as this weekend.

The price of independence

While the slogan “Madrid nos roba” (Madrid is robbing us) may appeal to the populists, there is a price to independence. Imagine if Puigdemont took the plunge and declared independence. Here is what that would mean:

From the view of the capital markets, point 2 would have the most immediate impact. A declaration of independence would cut any Catalan lender from ECB support right away, and cause a bank run as depositors transfer their funds into the rest of Europe. The BoS and ECB are under no obligation to support those institutions should a bank run occur.

The price of opportunity

All of this uncertainty is creating an opportunity. The chart below shows the relative performance of Spain stocks (IBEX) against eurozone stocks (Euro STOXX 50). The IBEX is currently testing the lower end of a historical range, which presents an opportunity for speculative position to profit from the panic.

The pattern for the US listed ETFs (EWP vs FEZ) is similar.

The Spanish bond market has already begun to recover. 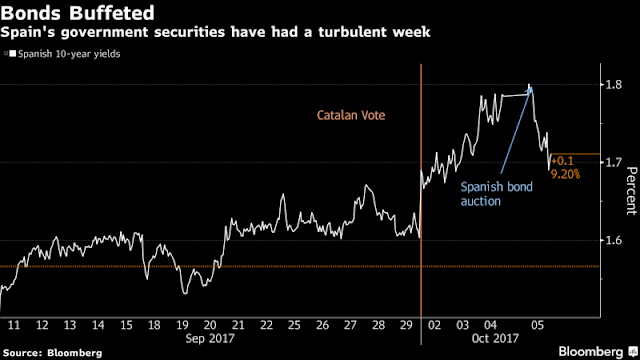 In all likelihood, the Catalan referendum and its aftermath is another manifestation of European theatre. When the German publication Bild interviewed Puigdemont (English translation at Business Insider), one of the concerns raised was if FC Barcelona would continue to play in the Spanish league after independence, so the problems can’t be that intractable. Hopefully, cooler heads will prevail and the crisis subsides.

That said, I’ve been wrong before. I took a similar optimistic view before the Brexit vote.

1 thought on “Be careful what you wish for: Catalan independence edition”