In the wake of the news of the latest North Korean news, Donald Trump responded with his usual tweetstorm. 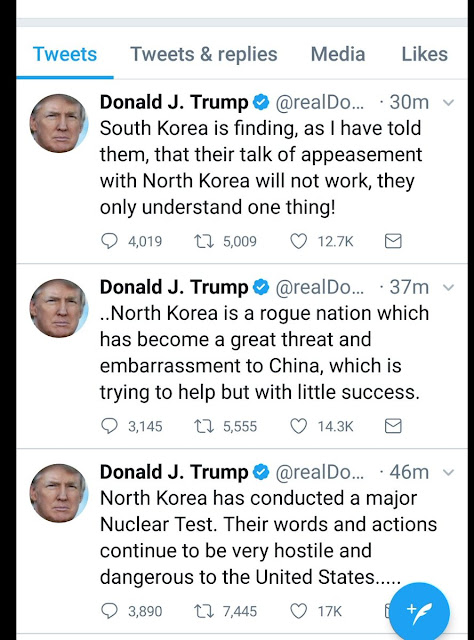 The markets have learned that Trump doesn’t necessarily follow up presidential tweets with action. Official statements, on the other hand, are another matter. In the aftermath of the North Korean missile test which overflew Japan, the statement that “all options are on the table” was far more serious and chilling.

After the North Korean H-bomb test, Trump met with his senior advisors and Secretary of Defense released the following statement to the press:

Good afternoon, ladies and gentlemen. We had a small group, a national security meeting today with the president and the vice president, about the latest provocation on the Korean Peninsula. We have many military options. The president wanted to be briefed on each one of them.

We made clear that we have the ability to defend ourselves and our allies, South Korea and Japan, from any attack. And our commitments among the allies are ironclad: Any threat to the United States or its territories, including Guam, or our allies, will be met with a massive military response. A response both effective and overwhelming.

Kim Jong-Un should take heed of the United Nations Security Council’s unified voice. All members unanimously agreed on the threat North Korea poses, and they remain unanimous in their commitment to the denuclearization of the Korean Peninsula. Because we are not looking to the total annihilation of a country, namely North Korea. But as I said, we have many options to do so. Thank you very much, ladies and gentlemen.

It was a measured response that made the following points:

How should investors react in the face of escalating tensions? Is the world on the brink of nuclear war, or another Korean war?

First, investors need to take a deep breath and step back, which can lead to panic. The Mattis statement was a measured response that was a climb down from the usual Trump “fire and fury” rhetoric. War is not imminent. The US will not go to war unless explicitly threatened.

It is unclear where the red lines are. The North Korean threat to fire missiles at Guam was very specific. It would fire four missiles at targets surrounding Guam (and not at Guam itself). Would the White House consider that to be a threat and a casus belli, or just an act of provocation?

Longer term, the world needs to determine a policy to deal with the emergence of North Korea as a nuclear power. Can the genie be put back in the bottle?

In 1942, the science fiction writer and libertarian Robert Heinlein wrote that “an armed society is a polite society”. That line that became a favorite of the Second Amendment crowd and NRA supporters. Today, you can find t-shirts with that slogan at gun shows. 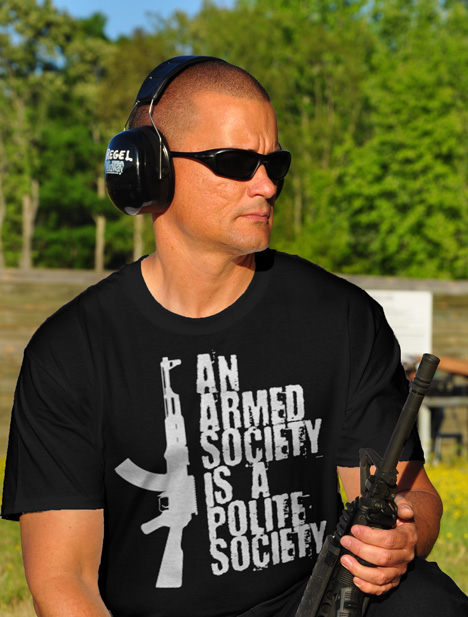 Barring some miscalculation by either side, my base case scenario is the world eventually adopts the same approach to dealing with North Korea. Kim Jong-Un will be told, “Welcome to the club, but you bear a heavy responsibility”, much in the manner that Barack Obama wrote a letter to Donald Trump (via CNBC), and other presidents have written their successors.

The “well armed society is a polite society” model has served the nuclear club well since the first use of nukes in 1945, and global geopolitics has been in an uneasy, but stable equilibrium. India and Pakistan, both of which acquired nukes at about the same time, have remained at peace. Similarly, both sides in the recent China-India border have taken steps to use measured military force. Even Israel, which is the sole nuclear power in the region, has not threatened to nuke any of its neighbors (see this Times of Israel account of how PM Golda Meir stepped back from the nuclear brink even in the dark days of the 1973 Yom Kippur War, when the existence of Israel was at stake).

That said, the entry of North Korea into the nuclear club will likely spark an arms race in the North Pacific. Abe’s Japan has already shown its desire to re-militarize. The latest development may cause Japan to seek its own nuclear weapons. South Korea may try to follow suit, though it is far more certain to raise its military budget in the near future.

These developments are bullish for the Aerospace and Defense stocks. These stocks have staged relative breakouts against the market, and North Korean actions are likely to highly bullish for this industry. 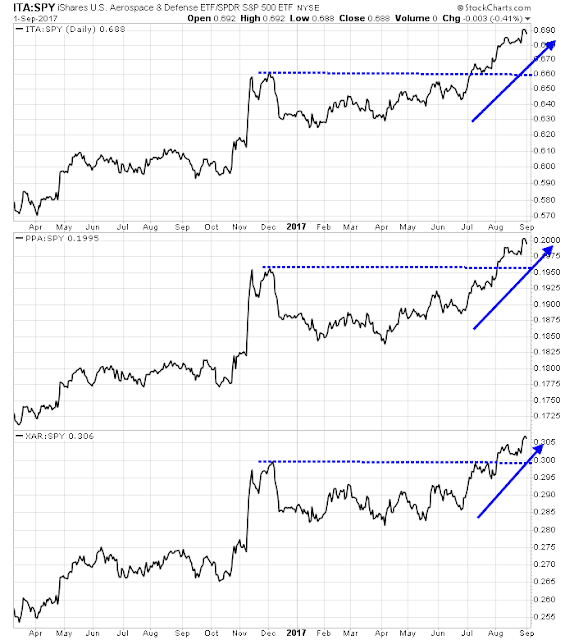 As I write these words, the markets are unsettled by the North Korean bomb test. Moreover, South Korea has revealed that it has detected North Korean preparations to test another missile, possibly an ICBM. The timing of the test is unknown, but a likely date is September 9, which commemorates the founding of the DPRK.

The South Korean KOSPI has not reacted well to the bomb test. Monday’s market opened down in Seoul and the close was weak. This market reaction was in stark contrast to the missile test that overflew Japan, when the KOSPI opened down over -1%, but recovered to close with a small loss. 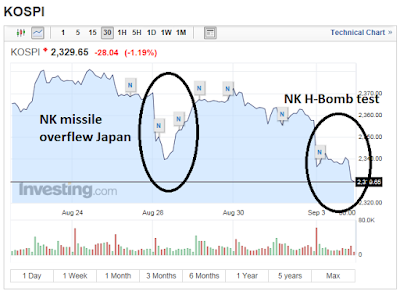 My inner investor is considering a plan to take a partial position in Aerospace and Defense now, with a view to add to his position once short-term geopolitical tensions start to clear.

5 thoughts on “The bullish implications of the North Korean Bomb”