The surprising conclusion from top-down vs. bottom-up EPS analysis – Humble Student of the Markets

Mid-week market update: Business Insider recently highlighted an earnings warning from Strategas Research Partners about possible earnings disappointment for the remainder of 2017 and early 2018. Expect a deceleration in EPS growth because of base effects:

A big part of Strategas’ argument stems from the fact that the period against which current earnings are compared — the first half of 2016 — was notably weak. And that, in turn, pushed year-over-year growth to unsustainable levels.

As the chart below shows, Wall Street is not bracing for the decline. Its estimates are represented by the blue columns, which show continued profit expansion over the next two quarters. Strategas has other ideas. Adjusting for historical factors, the firm sees earnings growth declining over the period before being cut almost in half by the first quarter of 2018, as indicated by the red columns. 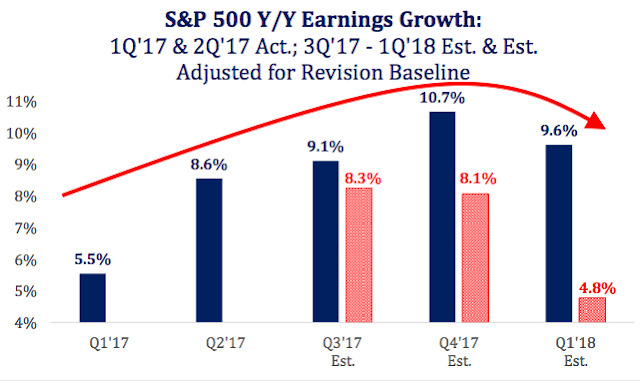 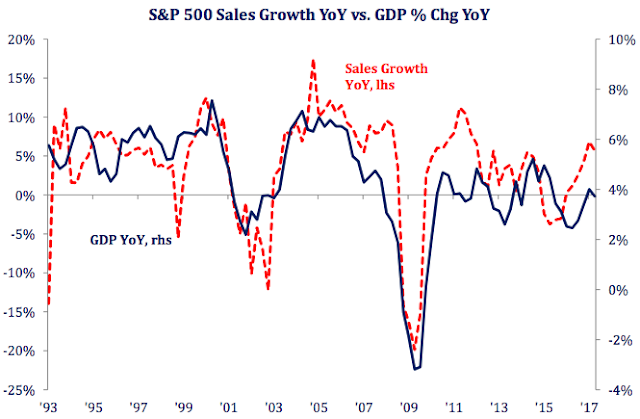 On the other hand, Ed Yardeni has the completely opposite bullish view:

(1) S&P 500 forward revenues per share, which tends to be a weekly coincident indicator of actual earnings, continued its linear ascent into record-high territory through the week of August 10.

(2) S&P 500 forward operating earnings per share, which works well as a 52-week leading indicator of four-quarter-trailing operating earnings, has gone vertical since March 2016. It works great during economic expansions, but terribly during recessions. If there is no recession in sight, then the prediction of this indicator is that four-quarter-trailing earnings per share is heading from $126 currently (through Q2) to $140 over the next four quarters.

Yardeni’s believes that there is little risk to stock prices, as long as forward 12-month EPS and revenues are rising. 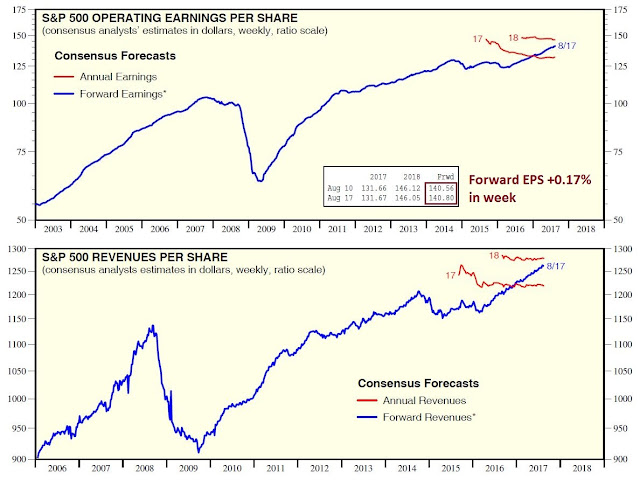 What`s going on? How do investors reconcile the two contradictory conclusions of analysis of the same data set?

The Strategas case for caution rests on lower than expected YoY EPS growth rates for the remainder of 2017 and into early 2018. The Strategas view is not unique. Callum Thomas is warning of a similar dropoff in EPS growth based on a deceleration in the weekly ECRI indicator. 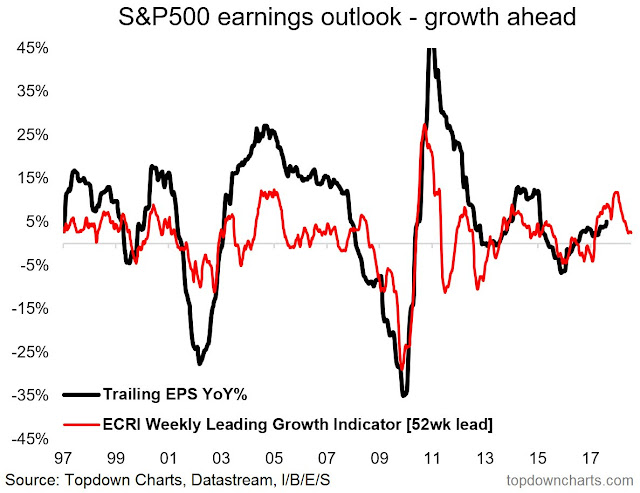 The key question in resolving the Yardeni bull and Strategas/Thomas bear debate appears to be a top-down vs. bottom-up debate. The Strategas analysis indicates that the market is likely to see disappointing growth rates in Q3 and Q4. Reading between the lines, Strategas seems to be estimating earnings and sales growth rates, rather than aggregating bottom-up derived earnings estimates and then calculating the growth rates afterwards. Some clues that it is employing a top-down analytical framework is the inconsistency of its conclusion with the relatively low levels of negative guidance shown by companies, and continued upward revisions of forward 12-month EPS and sales observed by Yardeni.

Which is right, the top-down or bottom-up analysis?

An important piece of this puzzle comes from Yardeni Research. While forward 12-month EPS is rising for the large cap S+P 500, it is falling in mid and small cap stocks. As the chart below shows, the rate of negative estimate revisions is higher as we go down the market cap band.

Technical analysts often use price breadth as an analytical tool. An often posed question is, “If the underlying theory is, if the generals (large caps) are leading the charge, are the troops (small and mid caps) following?”

In this case, we are seeing a negative divergence in fundamental breadth. While large cap forward EPS revisions remain healthy, negative estimate revisions in mid and small cap stocks reveal a lack of broader participation in fundamental improvement.

From a technical perspective, we are seeing a similar breadth deterioration as we go down the market cap band. The chart below depicts the net 52-week highs-lows for large, mid, and small cap stocks. As the chart shows, mid and small cap breadth is significantly weaker compared their large cap counterparts. 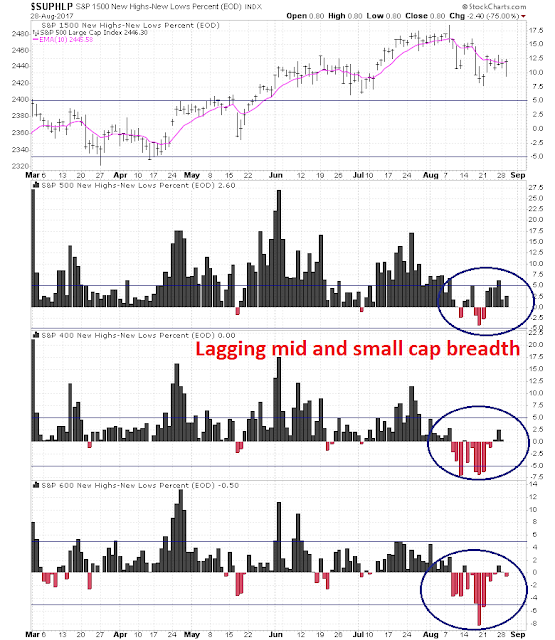 In conclusion, both the fundamental and technical frameworks lead to the conclusion that the generals are leading, but the troops are not following. These conditions indicate a high risk environment going into Q3 Earnings Season.

10 thoughts on “The surprising conclusion from top-down vs. bottom-up EPS analysis”