Mid-week market update: As the stock market staged a bounce yesterday, it was still exhibiting a pattern of lower highs and lower lows. After the close, the market ran into a dose of Trumponomics that spooked the market and pushed the index below its 50 day moving average.

Notwithstanding Trump’s fiery rhetoric about Charlottesville and immigration policy, which are beyond the scope of this publication, two details of his speech served to tank the market. First, his threat to shut down the government by holding up debt ceiling negotiations if his Wall was not funded did not do the bulls any favors. As well, his comment of “I don’t think we can make a deal”, when referring to NAFTA raised the specter of tariff walls.

Trump’s brinkmanship tactics over Wall funding by using the debt ceiling as a bargaining chip is a serious threat to market stability. Already, gold, as an alternative currency, is testing a key resistance level, while gold stocks have rallied through a relative downtrend line. 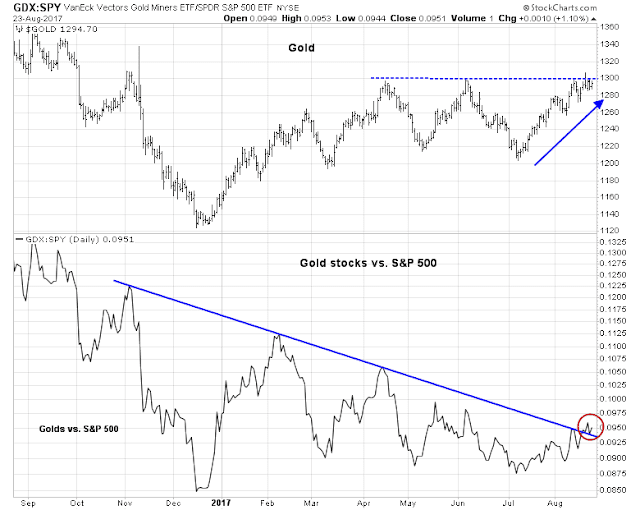 I will be monitoring this chart as a way of measuring the level of market anxiety.

The concerns over NAFTA should be less of a problem for investors. As this BNN article points out, the President cannot unilaterally rip up NAFTA without Congressional approval:

Without the support of Congress, a president might withdraw the U.S. from the international agreement, but he could not singlehandedly wave away the law on the U.S. books that implemented NAFTA.

An international economic law professor and former State Department lawyer said he believes it would ultimately end up in court. And he said U.S. courts would ultimately conclude that the president can’t rip up NAFTA without congressional support.

That’s because the president can’t just erase the 1994 NAFTA Implementation Act passed by Congress. Only Congress can pass laws. In addition, the U.S. Constitution makes clear that Congress has power over international commerce.

The markets have shown some skepticism over any negative impacts on trade from the NAFTA negotiations. As the chart below shows, Canadian and Mexican equities have outperformed the MSCI All-Country Index (ACWI) recently, while US equities have underperformed.

I interpret these conditions as indicative of a corrective market. My inner trading remains slightly short.