There has been much hand wringing by economists over the falling labor force participation rate (LFPR). As the chart below shows, the prime age LFPR, which is not affected by the age demographic effect of retiring Baby Boomers, have not recovered to levels before the Great Recession. 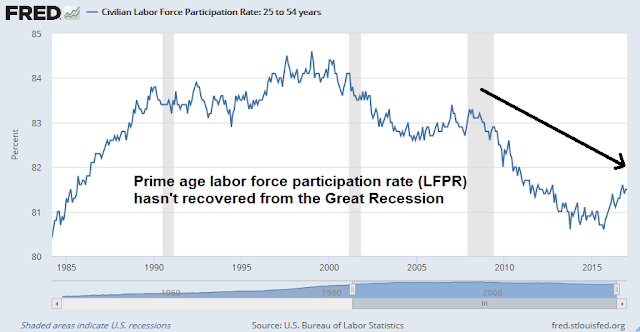 The lack of recovery in LFPR has caused great consternation over at the Federal Reserve. These readings suggest that there is still considerable slack in the labor market, despite the sub 5% unemployment rate.

A number of explanations have been advanced for this phenomena, such as jobless Millennials spending all their time playing video games in their parents’ basement instead of looking for a job (via Nicholas Eberstadt of the American Enterprise Institute). 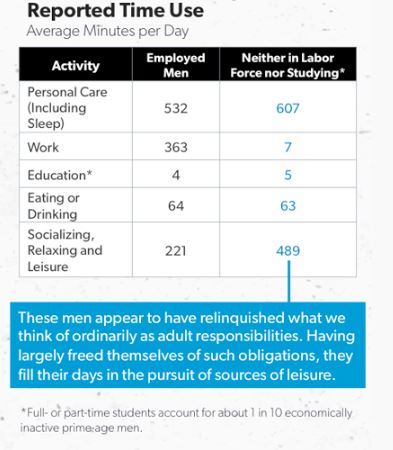 Another possible explanation is the growth of disability as a shield against unemployment payments run out. As the Great Recession hit, disabled workers became discouraged and chose to rely on their disability payments instead of trying to find another job. 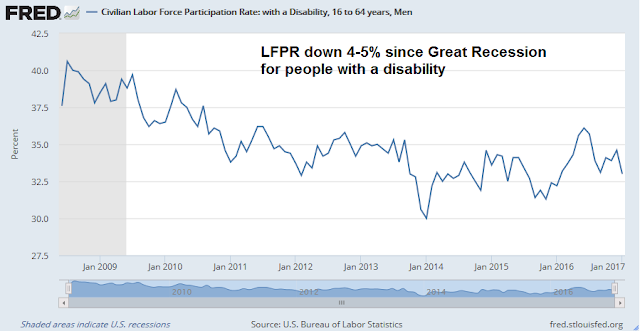 There may be another very simple alternative explanation for the collapse in LFPR. The answer is so simple, it’s criminal that anyone missed it.

Nicholas Eberstadt of AEI, who advanced the theory of the lazy Millennials, suggested an very simple explanation. The explosion in the incarceration rate in the United States has rendered a segment of the population virtually unemployable, which consequently depressed LFPR (via Bloomberg):

A single variable — having a criminal record — is a key missing piece in explaining why work rates and LFPRs [labor-force participation rates] have collapsed much more dramatically in America than other affluent Western societies over the past two generations. This single variable also helps explain why the collapse has been so much greater for American men than women and why it has been so much more dramatic for African American men and men with low educational attainment than for other prime-age men in the United States.

The idea has some merit. Consider that the US has the highest incarceration rate of the major countries in the world, beating the likes of Russia, South Africa, and other industrialized countries (via Wikipedia): 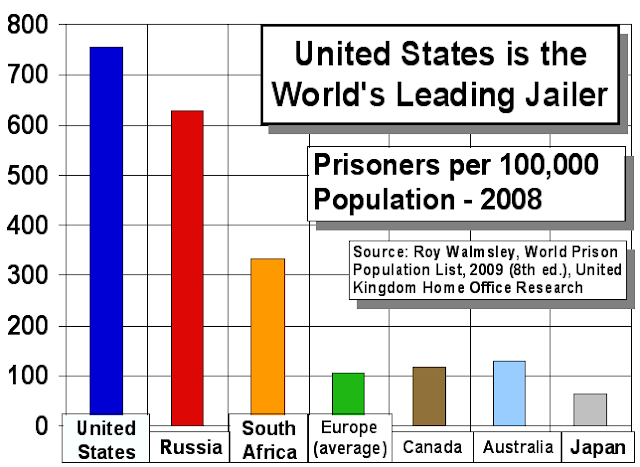 Prison and jail populations have exploded over the years (via Wikipedia). 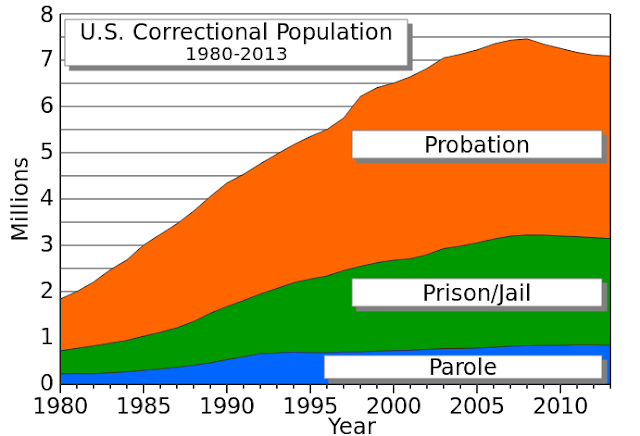 The problem isn’t just the number of people in prison and jail, but what happens to them when they are released. Research from the Sentencing Project found that 60% of former inmates could not find work a year after release. 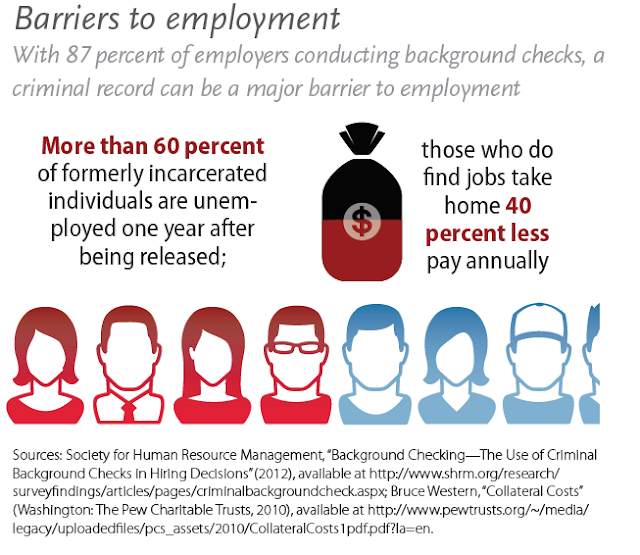 That’s just people with criminal records. What if you were arrested but never convicted. The WSJ reports that the proliferation of private databases have created employment barriers for people with arrest records. These are people who were arrested, but not convicted. It could be something as simple as a misdemeanor offense, or a case of mistaken identity.

When Precious Daniels learned that the Census Bureau was looking for temporary workers, she thought she would make an ideal candidate. The lifelong Detroit resident and veteran health-care worker knew the people in the community. She had studied psychology at a local college.

Days after she applied for the job in 2010, she received a letter indicating a routine background check had turned up a red flag.

In November of 2009, Ms. Daniels had participated in a protest against Blue Cross Blue Shield of Michigan as the health-care law was being debated. Arrested with others for disorderly conduct, she was released on $50 bail and the misdemeanor charge was subsequently dropped. Ms. Daniels didn’t anticipate any further problems.

But her job application brought the matter back to life. For the application to proceed, the Census bureau informed her she would need to submit fingerprints and gave her 30 days to obtain court documents proving her case had been resolved without a conviction.

Clearing her name was easier said than done. “From what I was told by the courthouse, they didn’t have a record,” says Ms. Daniels, now 39 years old. She didn’t get the job. Court officials didn’t respond to requests for comment.

I have a couple of rough ways of estimating the “criminal class” effect on the LFPR.  Using top-down data, the chart below from Bloomberg shows the differences between the “not in labor force” rate (NILF) between the US and other major industrialized countries. The latest data (2015) shows a 2.6% spread in NILF rate between the US and Canada. The NILF rates of those two countries last crossed in 2007. Before that, they crossed in 2001. What if the American NILF rate fell to the Canadian rate due to an equalization of incarceration rates? As the chart below shows, if we add back the 2.6% US-Canada NILF spread, the US prime LFPR would jump to 84.1% (red dot), which is above the rate seen before the Great Recession, and slightly ahead of 2001 and 2007, when the NILF rates of the two countries last converged (black dots). 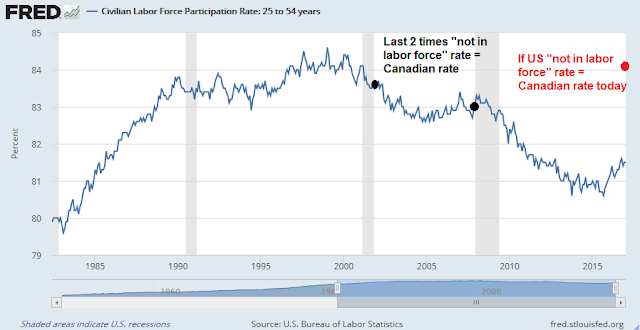 Another way I used to estimate the “criminal class” effect on the LFPR is to ask the question, “What if all former inmates found jobs as easily as the rest of the population?”

To answer this question, I used estimates by the academics Shannon, Uggen, Thompson, Schnittker and Massoglia in the paper “Growth in the US ex-felon and ex-prisoner population, 1948 to 2010“. I took the grey bars in this chart (ex-prisoners) as estimates of the former prisoner population. 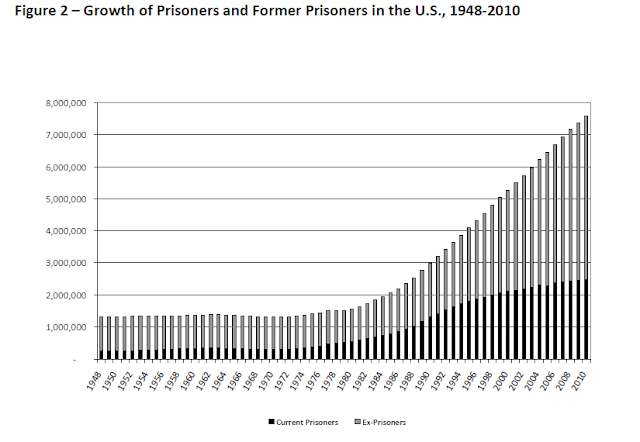 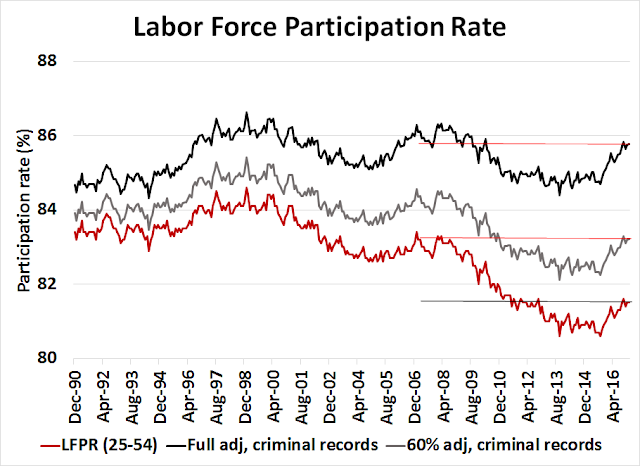 A feature, not a bug

I would add that this analysis assumes that there was no employment discouragement effect on people who were arrested but not charged. In reality, this “arrested but not convicted” category undoubtedly also had a depressing effect on the participation rate, as that population would have had sufficient difficulty in finding work that they would be more likely to leave the labor force than the general population.

In conclusion, using two separate approaches, I estimate that the surge in incarceration rate in the United States in the last couple of decades has dramatically affected labor force dynamics. The plunge in labor force participation rate is an unintended consequence of the country`s law-and-order focus. In other words, falling LFPR is a feature of past policy, not a bug.

As a result, the economy is likely far closer to full employment than standard unfiltered statistics, which has bullish implications for cost-push inflation. The slightly more hawkish tone of the latest FOMC minutes should therefore be taken as a welcome sign that the Fed will not fall behind the inflation fighting curve:

Many participants expressed the view that it might be appropriate to raise the federal funds rate again fairly soon if incoming information on the labor market and inflation was in line with or stronger than their current expectations or if the risks of overshooting the committee’s maximum-employment and inflation objectives increased.

Based on the results of this study, it could be argued that monetary policy should be on an even hawkish trajectory than three hikes in 2017.