Wow, Trump’s political honeymoon didn’t last very long! In the past few days, there have been numerous objections of Trump’s Executive Orders. I’ll spare you the details of the protests and demonstrations, particularly from the Left. What stood out were the objections from the Right and within the GOP. As an example, Eliot Cohen, who served under Condeleeza Rice, fretted about the threats that Trump posed to the American Republic:

I am not surprised by President Donald Trump’s antics this week. Not by the big splashy pronouncements such as announcing a wall that he would force Mexico to pay for, even as the Mexican foreign minister held talks with American officials in Washington. Not by the quiet, but no less dangerous bureaucratic orders, such as kicking the chairman of the Joint Chiefs of Staff out of meetings of the Principals’ Committee, the senior foreign-policy decision-making group below the president, while inserting his chief ideologist, Steve Bannon, into them. Many conservative foreign-policy and national-security experts saw the dangers last spring and summer, which is why we signed letters denouncing not Trump’s policies but his temperament; not his program but his character.

Precisely because the problem is one of temperament and character, it will not get better. It will get worse, as power intoxicates Trump and those around him. It will probably end in calamity—substantial domestic protest and violence, a breakdown of international economic relationships, the collapse of major alliances, or perhaps one or more new wars (even with China) on top of the ones we already have. It will not be surprising in the slightest if his term ends not in four or in eight years, but sooner, with impeachment or removal under the 25th Amendment. The sooner Americans get used to these likelihoods, the better.

If American conservatives have an intellectual hero, it might well be Friedrich Hayek — and rightly so. More clearly than anyone else, Hayek elaborated the case against government planning and collectivism, and mounted a vigorous argument for free markets. As it turns out, Hayek simultaneously identified a serious problem with the political creed of President-elect Donald Trump.

In “The Road to Serfdom” and (at greater length) in “The Constitution of Liberty,” Hayek distinguished between formal rules, which are indispensable, and mere “commands,” which create a world of trouble, because they are a recipe for arbitrariness. When formal rules are in place, “the coercive power of the state can be used only for cases defined in advance by law and in such a way that it can be foreseen how it will be used.”

Like the rules of the road, formal rules do not name names. They are useful to people who are not and cannot be known by the rule-makers — and they apply in situations that public officials cannot foresee.

Commands are altogether different. They target particular people and tell them what to do. (Think Hitler’s Germany, Stalin’s Soviet Union, Mao’s China, Castro’s Cuba.) They require the exercise of discretion on the spot. As examples, Hayek pointed to official decisions about “how many buses are to be run, which coal mines are to operate, or at what prices shoes are to be sold.”

Forgive me for being cynical, but blah blah blah…None of this matters very much.
The main objective of these pages is to make money for my readers. I try very hard to divorce my investment views from my political views. As the chart below shows, the stock market can prosper under both Democratic and Republican presidents.

With that preface in mind, here are some key metrics to watch that Donald Trump needs to achieve in order to politically prosper in his first term.

Newt Gingrich laid it all out in a recent New York Times interview:

Assuming that Trump can “keep America safe” (see the reactions from this recent BBC report), Bloomberg Intelligence chief economist Carl Riccadonna compiled a list of five economic metrics to watch as signs of American prosperity, all without resorting to “phony” statistics like GDP and the unemployment rate.

Prime age labor force participation rate: If prime age discouraged workers can return to the labor force in size, then score a win for Trump (if you want to follow along at home as the data updates, see this FRED chart). 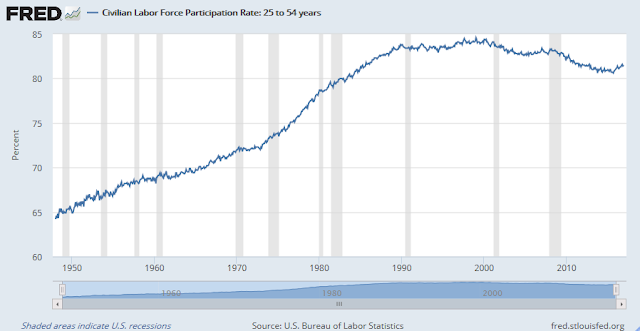 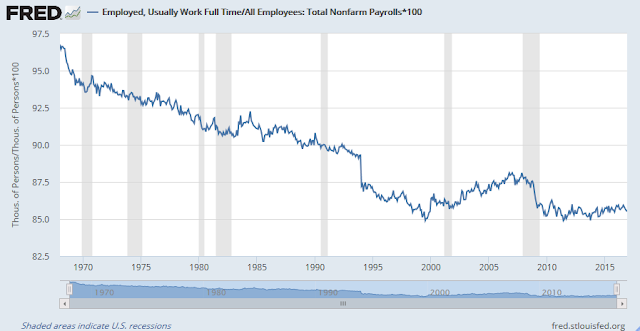 Manufacturing workers in the economy: The point behind bashing Mexico and China on trade was the disappearance of manufacturing jobs, which tend to be well paying. As the chart below shows, these jobs have been in secular decline. Can they come back? (FRED chart) 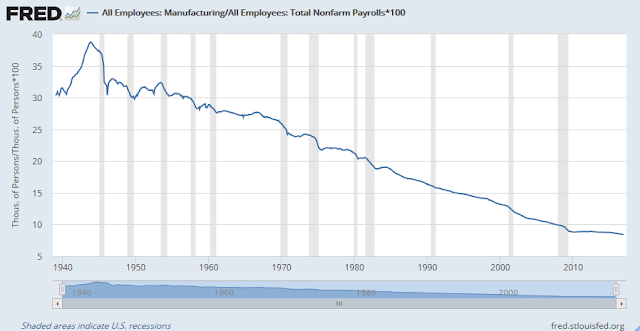 Capital expenditures: One of the puzzles of this economic expansion has been the tepid pace of capital expenditures. Trump’s proposal of a one-time tax holiday for the repatriation of offshore corporate cash is intended to address this problem. (FRED chart) 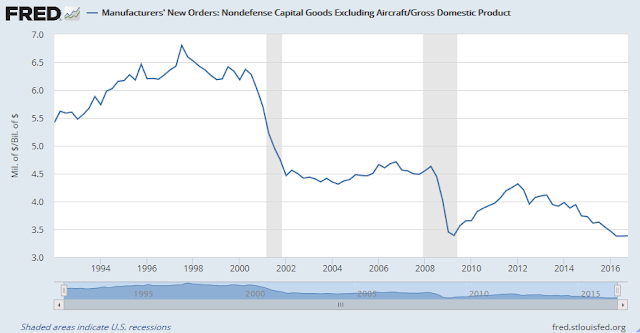 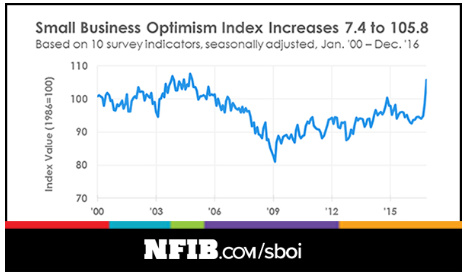 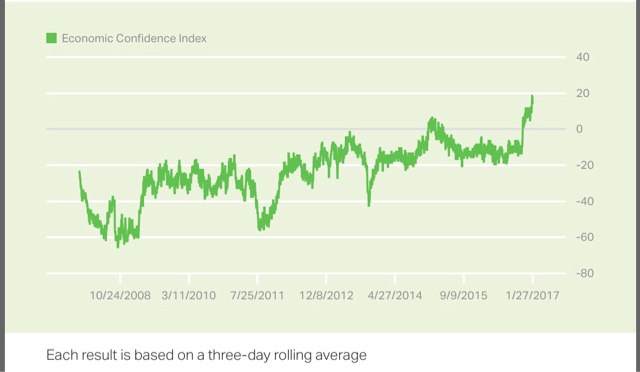 However, the rise in optimism has not been matched by any observable increase in small business sales yet. I discussed this disconnect extensively in a previous post (see Main Street bulls vs. Washington bears). 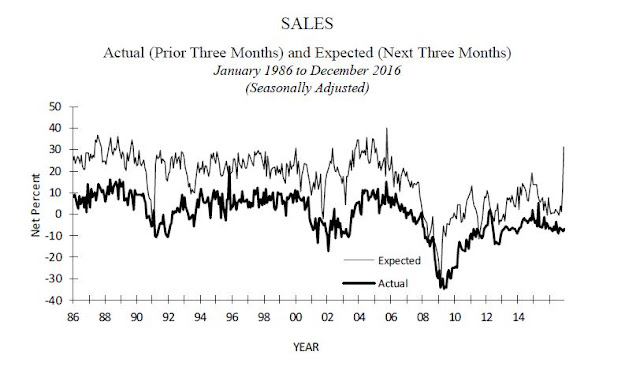 For investors, the question is slightly different. Incidents like the most recent one over objections to the ban on entry of foreign nationals from seven selected Middle East countries can serve to weaken Trump’s Congressional support among Republicans. In that case, it would either make more difficult the task of passing his promised fiscal package of tax cuts, which is a boost that Wall Street desperately wants. In the past, parties with control of the White House and both houses of Congress have struggled with passing legislation. 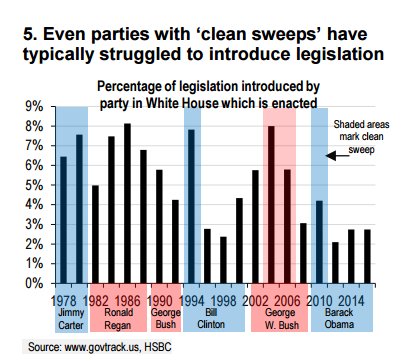 In conclusion, I urge my readers to cut through the political noise and watch the aforementioned five key indicators of whether Donald Trump can keep his promises to his political base. As well, keep an eye the reaction from Republican members in Congress as a measure of whether the new administration can successfully pass legislation. Then you can either go back to being jubilant (if you are a Trump supporter), or get into a rage (if you are a never-Trumper).