About a month ago (see The bear case: How Trumponomics keeps me awake at night), I highlighted a Bloomberg interview with BAML currency strategist David Woo. Woo pointed that there is an inherent contradiction in a couple of Trump’s policies. His fiscal policy of tax cuts is pro-growth and therefore USD bullish, but his “America first” trade policy needs a weaker dollar. So what does he really want, a strong dollar, or a weak dollar?

We may have an answer. In a recent WSJ interview, Trump said that the dollar is “too strong”, especially considering the China’s yuan is “dropping like a rock.” While those remarks were made in the context of Sino-American trade relations, Trump signaled that, if he had to choose, he would prioritize a weaker currency over fiscal stimulus.

Trump`s priorities of trade policy over fiscal policy is consistent with his criticism of the House Republican border tax adjustment plan as “too complicated“ (via WSJ). Already, the spectacle of passing a fiscal budget, even with Republican control of the White House, the Senate, and the House, is turning into a public “sausage making“ exercise.

A strategy of USD weakness makes more sense for Trump if he wants to achieve his trade policy objectives. As Larry Summers pointed out, Trump’s populist message of attacking trading partners like Mexico has the unintended effect of depressing the Mexican Peso. A lower MXNUSD exchange rate paradoxically incentivizes companies to move production south of the Rio Grande (via AP and Business Insider):

Summers told a panel at the World Economic Forum on Wednesday that the president-elect’s “rhetoric and announced policies” over Mexico have led to a big fall in the value of the Mexican peso against the dollar.

That, he said, is a “dagger at Ohio,” as it will make it even more attractive for firms to move to Mexico.

How to weaken the USD

Bloomberg featured an article that outlined several options that the US government could employ to weaken its currency, along with the pros and cons of each approach.

That brings to the point that FT Alphaville made:

A couple of previous notable Republican Presidents have been responsible for currency intervention, as seen in this handy chart. 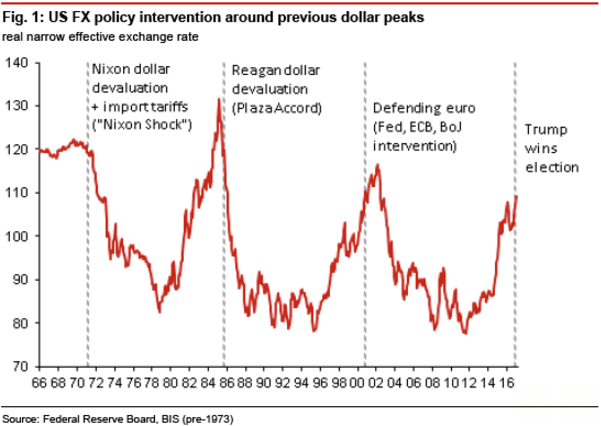 That brings me to another point. Should the Trump administration succeed in crafting another Plaza Accord, a weak greenback would be gold bullish. The chart below depicts the price of gold (blue line) and the trade weighted USD (red line, inverted scale), along with the major interventions shown in the previous chart. Should an agreement be reached to weaken the dollar, then historically that has marked the beginning of a major gold bull. 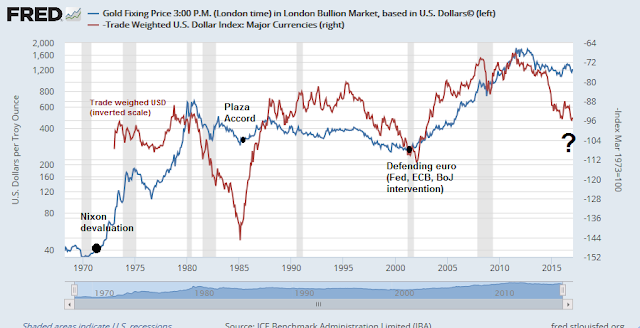 At this point, such a scenario is highly speculative. However, investors should be prepared for such an eventuality and its investment consequences, should it ever occur.

5 thoughts on “Weaken the USD to Make America Great Again”