A glass half-empty – Humble Student of the Markets

Mid-week market update: About two weeks ago, I wrote a post indicating that market had focused on the positives of a Trump presidency (see The Trump Presidency: A glass half-full?). Now it seems that market psychology is subtly shifting to a glass half-empty view.

It is very revealing when the new nominees for the key commerce and treasury cabinet posts make market soothing noises and stock prices barely move. Josh Brown’s reaction to Steven Mnuchin as the Secretary of the Treasury and Wilbur Ross as Secretary of Commerce is probably fairly typical of the market:

Good morning. Just wanted to check in briefly to voice my approval for the Treasury Secretary and Commerce Secretary picks announced by the Trump transition team this morning. They’re both highly accomplished and capable people who’ve held senior roles within businesses, even if they don’t have government experience.

To my knowledge, neither is looking to eject homosexuals, Jews or brown people from the country, so that’s a step in the right direction. I don’t believe that either has an agenda against women or takes money directly from Russian banks or posts frog memes on Twitter. Neither pick is a sitcom star from the 1980’s or one of the President-Elect’s children.

The hourly SPX chart below tells the story of a lack of positive reaction to good news. Such market reaction points to short-term bullish exhaustion.

There are a number of signs that the rally has gotten ahead of itself. Marketwatch reported that TrimTabs sounded a warning about the excess bullish enthusiasm that they were seeing in fund flows:

“Investors’ appetite for U.S. equity ETFs has been almost insatiable since the election, which is a negative contrary signal,” the firm wrote in a research report.

The category of funds saw positive flows every trading day between Nov. 8 and Nov. 22, amounting to “a stunning $52.2 billion” in overall inflows, TrimTabs wrote, adding that the level of inflows represented a record for an 11-trading-day period. November is on track to break the previous record for monthly inflows, December 2014, when $45.4 billion moved into the category…

“A wide range of sentiment measures suggests the bull camp has become quite crowded,” the firm wrote, citing its U.S. Equity ETF Index, which uses ETF flows to evaluate short-term market timing. On Nov. 18, the index hit a three-year low, which could presage a broader market pullback.

From a tactical perspective, Brett Steenbarger wrote that his composite trading model had sounded a cautionary note:

Readings of +3 or greater and -3 or less have had particularly good track records in and out of sample, anticipating price change 5-10 days out. Note that we hit a -3 reading on Friday; prior to that we saw +3 readings shortly before and after the election. 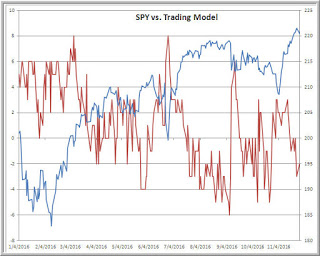 To be sure, these episodes can resolve themselves in sideways consolidation rather than downward corrections:

Thus far, we are not seeing significant breadth deterioration in stocks. For ten consecutive sessions, we have had fewer than 200 stocks across all exchanges register fresh monthly low prices. This breadth strength generally occurs in momentum markets; weakening of breadth–particularly an expansion in the number of issues making fresh lows–tends to precede market corrections. It is not at all unusual for momentum markets to correct more in time than price. We’ve seen selling pressure the past two sessions, but not significant price deterioration. This dynamic allows momentum markets to stay “overbought” for a prolonged period as price consolidates and often grinds higher.

While the predominant market psychology seems to be the “buy the dip” variety, there are a number of events that could change that in a hurry. First, there is the October Employment Report on Friday, which could be a big market moving event. In addition, both the Austrian presidential election and Italian referendum are scheduled to be held on Sunday, which are also potential market moving events with binary outcomes that are difficult to predict.

No signs of a major top

Despite these signs of short-term weakness from sentiment models, Ed Yardeni showed that sentiment is nowhere near levels that are consistent with major market tops (h/t Urban Carmel): 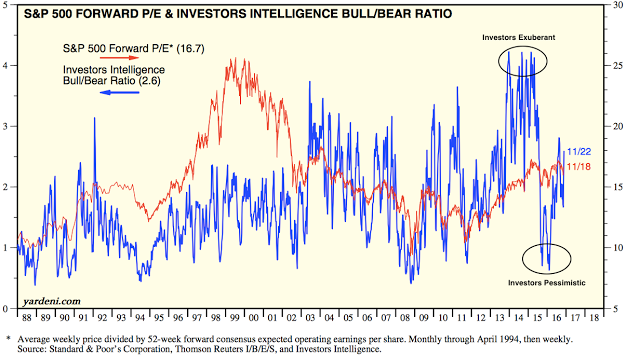 Still this equity rally still has a FOMO (Fear Of Missing Out) quality as underperforming managers scramble to buy risk as stock prices rise. Watch for the greed factor to dominate as we approach year-end, as exemplified this seasonal pattern analysis from Callum Thomas. 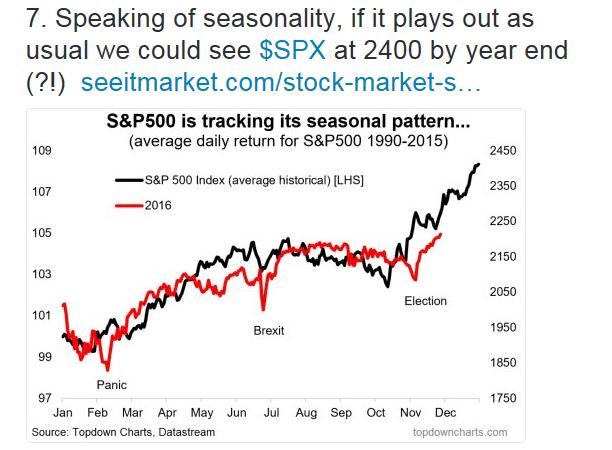 My inner trader remains in cash, but he is prepared to buy any dips in anticipation of a December market surge.

12 thoughts on “A glass half-empty”