Investment insights when giving thanks – Humble Student of the Markets

In Canada, we had our Thanksgiving a month ago (because the growing season is shorter and it makes no sense to have Thanksgiving in November when it’s freezing in much of the country). Nevertheless, in the spirit of American Thanksgiving, I reflected on what to give thanks about.

In light of the events in Paris and Brussels, one silver lining in the world has been the dramatic slide in war deaths in the last half century. We haven’t totally eliminated wars, but in comparison to the horrific carnage of the two World Wars, the modern era`s casualty rate is one thing to be thankful about. 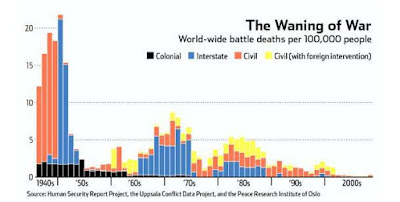 The sheer scale of the human destruction was also dramatically illustrated by this New York Times article which showed that the German Wehrmacht lost more men in a single month in January 1945 than all American losses in the 20th Century.

The triumph of Europe
As I thought about the most recent terrorism threat in Europe, my most encouraging moment was the image of German chancellor Merkel asserting that she was standing shoulder to shoulder with the French. That episode represented a sea-change in European history, as the French and Germans (also Prussians) were the primary opponents of major European wars in the last couple of centuries (see my previous post Lest we forget, or why you don’t understand Europe).

The image of Angela Merkel on stage in support of French President Hollande also illustrated the dramatic triumph of the European Project. In the wake of the Second World War, Western Europeans sought to bind the French and Germans together so that war between these two states would never happen again. They succeeded, first with the creation of the EEC and which later became the EU. If you offered any 1946 European leader a choice between continuing the cycle of death and destruction over the next few generations on one hand, or paying for it in the form of political discord between core Europe and peripheral Europe (Greece, Spain, Portugal, etc.), he would have gladly taken that bargain. 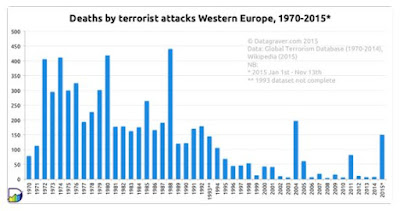 Starting with the 1960s, Europeans have had to endure the likes of the abortive Algiers putsch by French officers and the OAS; the Baader Meinhof gang; the Red Brigade (and the murder of popular Italian politician Aldo Moro); events like the Bologna massacre and the Munich Olympics; not to mention nationalist movements like the Basque separatists and the Irish Republican Army. During the same period, the United States had to contend with left-wing movements like the Weathermen and the SLA, as well as the Ku Klux Klan on the right.

Be thankful. Lest we forget.

The ISIS struggle
This picture tells the story of 1000 words: Obama and Putin huddle at a side meeting at the recent G20 Summit in Turkey(!) Undoubtedly ISIS was the main subject of discussion as the Paris attack and the downing of the Russian airliner, not to mention the bombing in Beirut, served to galvanize European resolve against the jihadists. 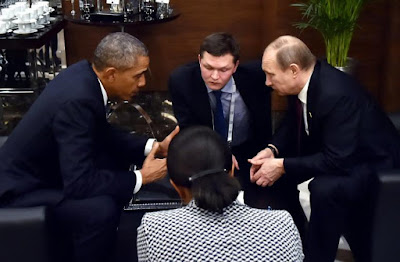 In connection with that half-hour impromptu meeting at the G20 Summit, this Barron’s interview with Larry Jeddeloh is very timely. I have known Larry Jeddeloh for years and I think he is being overly dramatic, but he does make some good points (emphasis added):

The risk profile for oil prices is changing pretty rapidly. We think the risk of a conflict is going to build very fast now in the Middle East. There is no premium in the oil price whatsoever. There’s a new sheriff in town, Vladimir Putin, and he has an interest in higher oil prices, not lower oil prices. The old sheriff, the United States, had an interest in stable to lower prices.

What follows is highly speculative, but…

What’s going on in the Middle East is the realignment of the petrodollar system. You have the Saudis talking to the Russians about a defense agreement. Deputy Crown Prince Salman, the defense minister, was in Moscow, visiting Putin. They discussed several agreements, including an oil agreement. With the U.S. pullout from Iraq and Afghanistan, U.S. influence over Saudi policy is just about gone. The Russians, on the other hand, need a higher oil price, as do the Saudis, because the Saudis are running through currency reserves at a very rapid rate, and are running a deficit that is nearing 20% of GDP. That isn’t sustainable. The Russians, Iranians, and Syrians are now all on one side of the camp. The Saudis are very concerned that the Iranian-funded, Iranian-trained Houthi rebels in Yemen will hit the Saudi oilfields. The thing to look out for is a deal in which Iran will stop backing the Houthi and, in return, Saudi Arabia stops pumping 10.3 million barrels a day and reduces output. The Russians broker the deal because they can benefit dramatically from a Saudi shift in oil policy. You get a more formal relationship developing between Russia and Saudi Arabia, which together have 21 million barrels a day in production. And they regain control of the pricing mechanism in the next six months. I think the Saudi willingness to over-pump is going to change when the threat to their wells recedes. When the Saudis shift their policy, the oil price will head north. 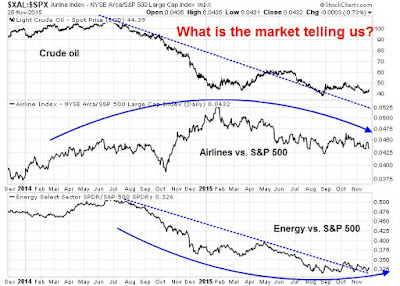 Larry Jeddeloh’s comment about the new Russian sheriff in town brings up a parallel analysis of the relative performance of Russian stocks (RSX) against the MSCI All-Country World Index (ACWI) compared to US energy stocks (XLE) against ACWI. 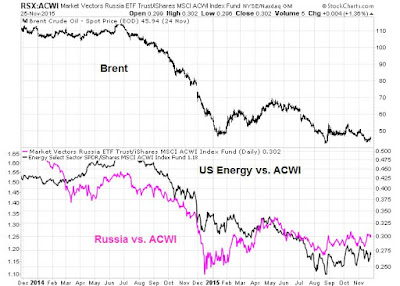 Several thoughts came to mind when I saw the chart above:

Listen to the market. You would be surprised at what it tells you.