It isn’t often that we get to participate in buying stocks at the levels that Warren Buffett’s Berkshire Hathaway bought them at. Most of the time, the public finds out in regulatory filings after the fact and the stocks have already moved up. Here is one exception that I discovered.

In August 2013, Berkshire disclosed that it had invested about $500 million in Suncor Energy (SU) (CNN). The Street got excited because it had also made an investment in ExxonMobil (XOM). Fast forward to February 2015. Berkshire sold its XOM stake but added to its SU position (via CBC).

In the chart below, I have marked the zones when Berkshire bought its SU stake below. Last night`s closing price of USD 27.66 is right about where Buffett had bought his positions. In other words, you and I can buy SU now at roughly the same price as Buffet bought his stake. 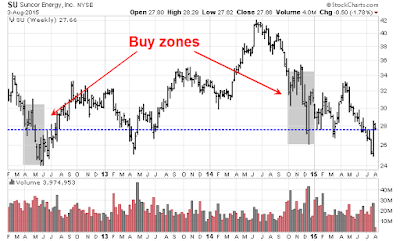 Last week, Suncor Energy report its financial results and earnings were above Street expectations. Not only that, it raised its dividend and reinstated its share buyback program. The company has a healthy balance sheet and it is one of the more conservatively capitalized companies in the Canadian oil patch. The dividend yield is just slightly north of 3%.

While I recognize that oil and oil stocks are nosediving, this is the chance to pick up a stock at a level that Buffett bought in at. Opportunities like that don’t come around too often.

Is this investment idea contrarian enough for you?

Disclosure: I have no positions in Suncor, but I may initiate a position depending on how negative the feedback is. So please, either comment at the end of this post, email me at cam at hbhinvestments dot com or tweet me at @humblestudent. Tell me what a stupid idea this is, how SU is a value trap and what an idiot Warren Buffett is to be holding energy stocks when it was obvious that oil prices would be tanking.