Fun with quant: Pure and naïve factors – Humble Student of the Markets

A reader alerted me to a CNBC report of a bullish analysis by Bespoke’s Paul Hickey:

The independent market researcher is building his bullish case by zeroing in on the Citi Economic Surprise Index, which is built to measure optimism in the economy.

In the week ending Friday, the index flipped into positive after spending more than 100 days in negative territory. Hickey contends the move suggests investors are feeling more confident about the economy’s direction, so there’s a good chance stocks will rip higher.

“There are five prior periods that we’re talking about. One, three and six months later, the S&P was higher four out of five times,” Hickey told CNBC’s “Trading Nation” on Friday. “When we looked at when these prior streaks have ended and expectations have been ratcheted down enough, the market actually did quite well going forward.” 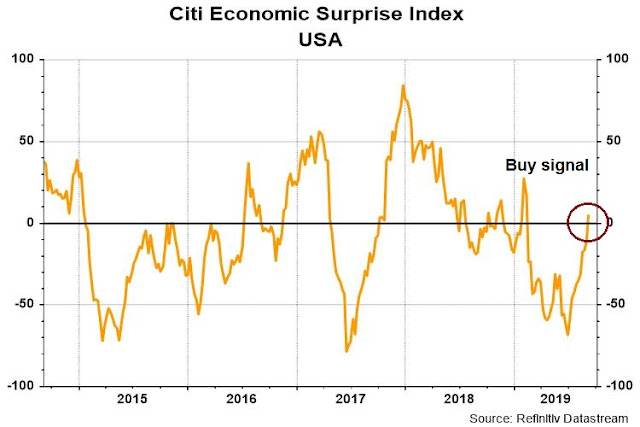 Quantitative analysts often struggle with a hidden problem called multicollinearity, which is the tendency of two variables that are closely correlated but have different effects. One example of multicollinearity is a person’s height and weight. One way of addressing this problem is to isolate the “pure” effect of a signal from its “naive” multicollinear effect.

Here is an analysis of the pure and naive effects of the Economic Surprise Index (ESI) surge factor.

What are you measuring?

The chart below shows the signals, as defined by Hickey, of the instances when ESI spent at least 100 days below zero, and then turned positive, along with market returns. While the “naive” signal appears impressive, and stock prices did rip higher in four out of five instances, a more discerning eye revealed that the rallies could be attributable to changes in policy. 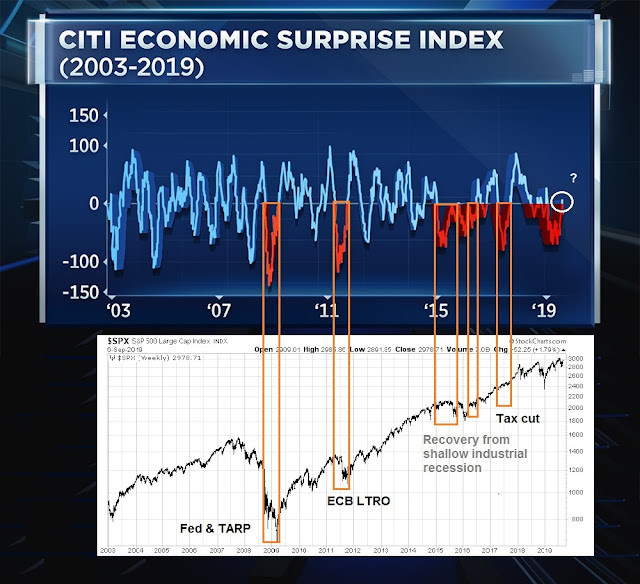 The one instance when the ESI rose above 0 after a prolonged period in the negative was 2015, which was a shallow industrial recession sparked by tanking oil prices. During that episode, the market had a false start and the performance of the ESI signal was erratic at 50%, with the caveat that the count was very low (n=2) and doesn’t mean very much.

What about today? To be sure, we have an ESI buy signal, but where are the policy underpinnings?

If the relief is over the Sino-American trade war, there is no news indicating that either side is about to soften its position. Xi used the word “struggle” 60 times in a speech to official media last week, so don’t hold your breath for any significant Chinese concessions. In fact, Bloomberg reported that the US trade war might expand to Europe in the near future, contrary to what was an apparent handshake agreement at the most recent G-7 summit:

U.S. is moving ahead with an investigation into a new French digital tax that could lead to import tariffs on French wine and other goods, despite hopes raised at August’s G-7 summit.

A senior Trump administration official confirmed that it’s continuing a Section 301 probe into the French measure and its impact on American digital champions including Amazon.com Inc., Facebook Inc., and Alphabet Inc.’s Google.

The probe is being conducted under the same statute used by the U.S. to levy tariffs on China as part of an escalating trade war between the world’s two largest economies, and could clear the way for targeting billions in French exports to the U.S.

French President Emmanuel Macron thought he’d avoided the threat of tariffs with an agreement at the Group of Seven meeting in Biarritz, France, saying at an Aug. 26 joint press conference with President Donald Trump that “we have reached a very good agreement.”

The French say their 3% levy on French-based revenue of digital companies, which took effect in July, is temporary until a global agreement is reached at the Organization for Economic Cooperation and Development on how to tax global digital companies that use complicated structures to shift earnings to low-tax jurisdictions. At the G-7 leaders agreed to address the issue of taxing digital companies in OECD negotiations.

As well, don`t forget the looming threat of American retaliation on the Boeing-Airbus dispute:

The U.S. is expected to get the go-ahead from the World Trade Organization in the coming weeks to impose tariffs on billions of dollars in imports from the EU as part of a long-running dispute between aerospace competitors Airbus SE and Boeing Co. Trump also faces a decision before November over whether to go ahead with his threat to impose tariffs on cars imported to the U.S. from Europe as a national security threat.

Tariff Man will ride again. Policy factors are likely to overwhelm the effects of the recent surge in ESI.

4 thoughts on “Fun with quant: Pure and naïve factors”