Imminent war with Iran? – Humble Student of the Markets

The headlines look ominous. The US has dispatched a carrier task force to the Persian Gulf, and a second one is due to arrive soon. The State Department ordered the evacuation of all non-essential personnel from Iraq:

The U.S. State Department has ordered the departure of non-essential U.S. Government employees from Iraq, both at the U.S. Embassy in Baghdad and the U.S. Consulate in Erbil. Normal visa services at both posts will be temporarily suspended. The U.S. government has limited ability to provide emergency services to U.S. citizens in Iraq.

We had a threatening Presidential tweet over the weekend.

Reuters reported that Exxon Mobil is evacuating foreign staff from an Iraqi oilfield near Basra:

Exxon Mobil has evacuated all of its foreign staff, around 60 people, from Iraq’s West Qurna 1 oilfield and is flying them out to Dubai, a senior Iraqi official and three other sources told Reuters on Saturday.

Though it was said to be a purely precautionary measure:

Production at the oilfield was not affected by the evacuation and work is continuing normally, overseen by Iraqi engineers, said the chief of Iraq’s state-owned South Oil Company which owns the oil field, Ihsan Abdul Jabbar. He added that production remains at 440,000 barrels per day (bpd).

Is the US about to attack Iran? Should you buy tail-risk insurance?

The short answer is no. What was revealing about the State Department evacuation order is they evacuated non-essential personnel, but they did not evacuate dependents, which would be the standard procedure ahead of an imminent attack. Moreover, while the Germans and Dutch suspended training missions of Iraqi forces, the French did not. Another normal operating procedure would be to inform allies with forces in the region so that they can be prepared for conflict. This suggests that these moves were purely precautionary measures should conflict break out.

Much of the pressure comes from National Security Adviser John Bolton, who is a “anyone can go to Baghdad but Real Men go to Tehran” hawk from the Bush-Cheney era, according to The Economist:

When Donald Trump hired John Bolton to be his national security adviser, he reportedly joked that the mustachioed hawk was “going to get us into a war”. It is easy to see why. When serving under George W. Bush, Mr Bolton embellished intelligence on Cuban and Syrian weapons and lobbied hard for the invasion of Iraq. After leaving government he argued that America should bomb Iran to set back its nuclear programme. Now that he’s back, he appears to be on the warpath once again.

It was Mr Bolton, not the commander-in-chief, who announced on May 5th that America had dispatched an aircraft-carrier strike group and bombers to the Persian Gulf. This was in response to undisclosed intelligence which, unnamed officials claimed, showed that Iran and its proxies were planning attacks on American forces (or its allies) in the region. On May 9th Mr Bolton reviewed war plans, updated at his request, that call for sending up to 120,000 troops to the Middle East if Iran attacks or restarts work on nuclear weapons, according to the New York Times. Such planning is not a sign of imminent conflict.

Bolton may be trying to achieve a Gulf of Tonkin like incident, or trying to provoke Iran into a military response for a casus belli.

Some fear Mr Bolton is looking for a provocation by Iran, adding ominous undertones to recent events in the region. On May 12th four oil tankers were struck by a “sabotage attack” off Fujairah, part of the United Arab Emirates (UAE). The incident remains murky, but Emirati, Saudi and American officials claim that four ships—two Saudi, one Emirati and the other Norwegian—had 1.5-metre to 3-metre holes blown in their hull, near the waterline. Unnamed American officials were quoted fingering Iran or its proxies as the likely culprit, without presenting evidence. Fujairah lies just outside the Strait of Hormuz, a key chokepoint that Iranian officials have threatened to block if America attacks.

Business Insider suggested that Trump is trying to replay his

North Korean negotiation tactics of applying maximal pressure:
Observers point to a similar pattern in his treatment of another state where the US is determined to neutralize a nuclear threat: North Korea.

With North Korea, Trump initially threatened the “total destruction” of the state following a series of missile tests by Pyongyang in 2017, then when North Korea agreed to denuclearization talks the president stepped back from threats of military action, and lavished praise on its leader, Kim Jong Un.

With Iran maximum pressure is again being used as leverage to bring Tehran to the negotiating table, they claim. Trump on Thursday tweeted: “I’m sure that Iran will want to talk soon,” and according to multiple reports has told advisers that he wants a diplomatic solution to the current crisis.

“He is trying to rerun the North Korea thing, to be as extreme as he can be up until the point of military action,” Thomas Wright, a Brookings Institution fellow told the New Yorker in an article published Friday.

So far, the tactics haven’t worked:

Iran’s leaders have thus far shown little willingness to reopen negotiations with the US unless it reenters the Obama administration-brokered nuclear agreement, and President Hasan Rouhani in remarks Thursday gave his own summary of US policy.

“In the morning they send their carrier, at night they give us telephone numbers. But we have enough numbers from the Americans,” he remarked.

Here is a simple explanation of what’s happening. The WSJ attributed the racheting up of tensions as a simple misunderstanding of intelligence and misread of each other’s intentions:

Intelligence collected by the U.S. government shows Iran’s leaders believe the U.S. planned to attack them, prompting preparation by Tehran for possible counterstrikes, according to one interpretation of the information, people familiar with the matter said.

That view of the intelligence could help explain why Iranian forces and their allies took action that was seen as threatening to U.S. forces in Iraq and elsewhere, prompting a U.S. military buildup in the Persian Gulf region and a drawdown of U.S. diplomats in Iraq.

Meanwhile, administration officials said President Trump told aides including his acting defense chief that he didn’t want a military conflict with Iran, a development indicating tensions in the U.S.-Iran standoff may be easing.

Ironically, the more the media portrays Bolton as the puppet-master, or the man behind the throne, of rising tensions with Iran, the less likely war will be. Trump has a history of casting aside aides who become more overshadow him. Just remember the fate of Steve Bannon.

For the last word, I offer the article from the satirical site, The Onion, which announced that John Bolton stumbled into the Capitol Building claiming that he had been shot by Iran. 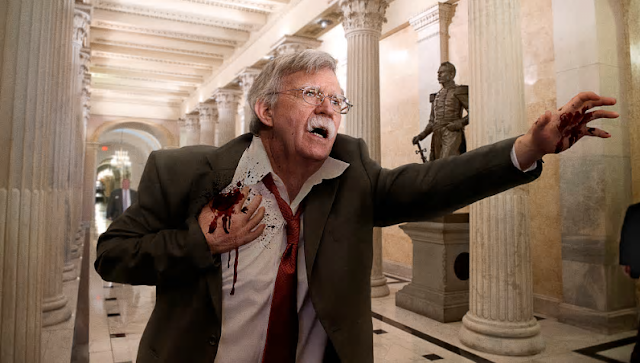 Relax! War is not imminent.