Mid-week market update: The instant market reaction on FOMC day can often be deceptive. Instead of a general market comment, I will focus instead on analyzing sectors using sentiment, momentum, and contrarian approaches. As a measure of sentiment, John Butters at FactSet recently analyzed sectors by the number of buy, hold, and sell rankings. 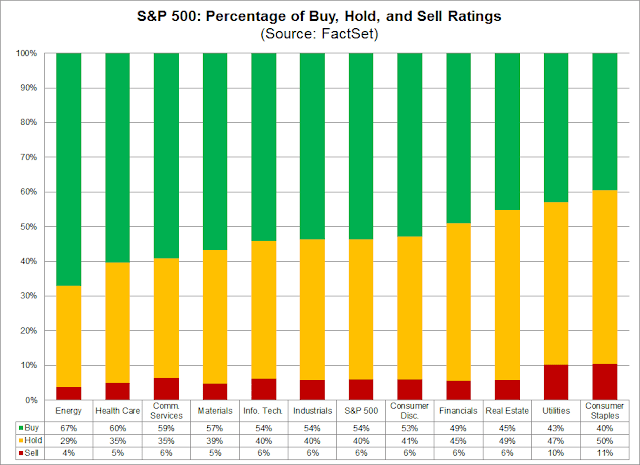 The sector with the most buy ratings is Energy, but I am going to set aside Energy and Materials from this analysis as commitments to those sectors amount to a bet on commodity prices, which has historically been inversely correlated to the USD. As the chart below shows, the USD Index has been range bound since November, and so has the relative performance of Materials. The relative performance of Energy to the market has also been range bound for 2019, despite the rally in oil prices. 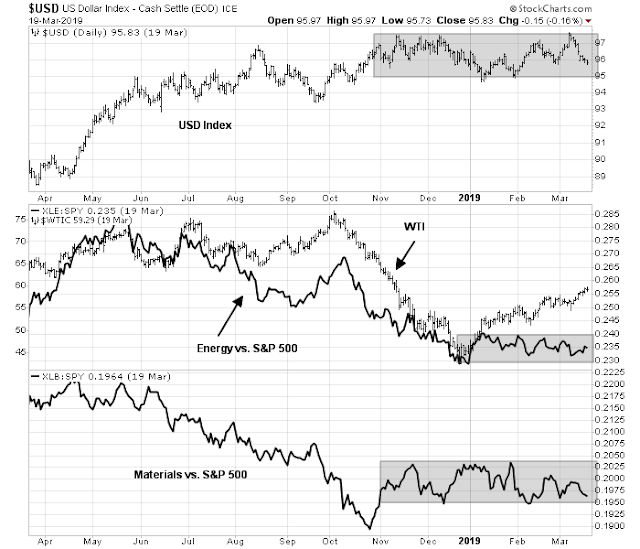 I can make a couple of observations from the FactSet bottom-up analysis:

The bottom-up high beta tilt of analyst rankings make me somewhat uneasy. The latest warning from FedEx earnings call should not be ignored:

We see solid economic growth in the U.S. but somewhat below last year’s pace. Internationally, performances is mixed across regions as overall growth moderates. The Eurozone and Japan still appear sluggish while emerging markets growth eases at a gradual pace. A recurring theme in global surveys on economic activity is a negative impact from global trade frictions and heightened uncertainty. World trade is slowing, and leading indicators point to positive but ongoing deceleration in trade growth in the near term.

Since our last earnings call, we have seen the overall China economy slow down further, and this has impacted other Asian economies. Given the size of China, no markets will be able to absorb more than a fraction of what China produces, but customers continue to look to diversify from China. We have also seen some customers evaluate mode optimization. Our network and portfolio lets customers respond quickly and act locally for our customers in China, as well as around the world.

In addition to the downbeat assessment from FedEx, which is regarded as a bellwether for global economic activity, there has been also been an enormous divergence between global stock prices and estimate revisions. 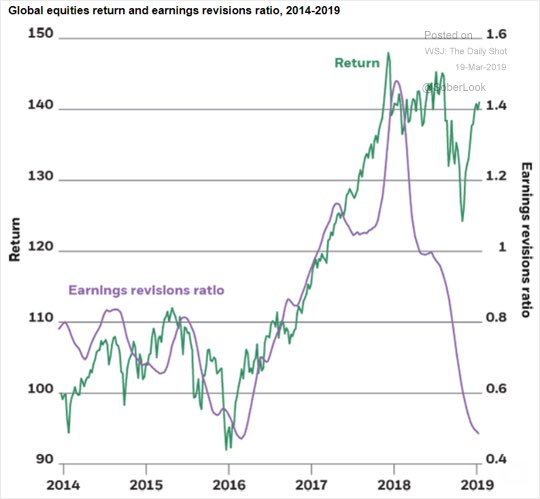 The following chart from Yardeni Research Inc. drills down at a sector level to how forward 12-month EPS estimates have been changing. 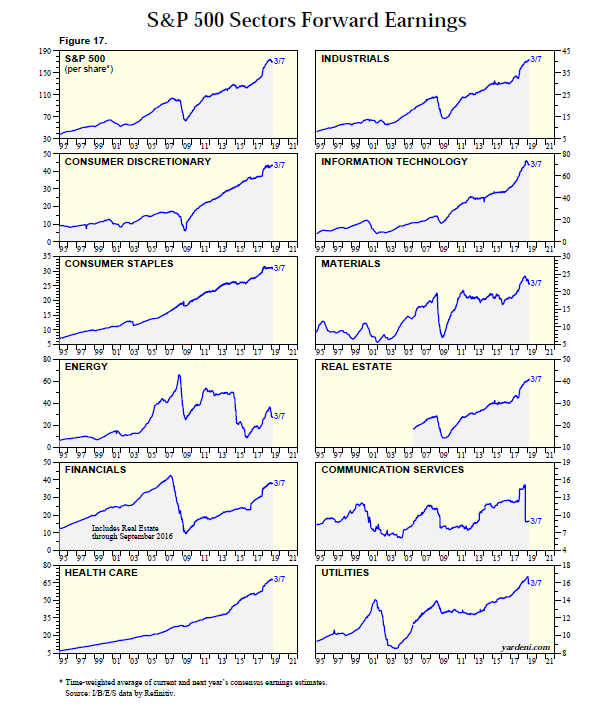 I can make the following observations from this analysis of estimate revision, which is a way of measuring fundamental momentum: 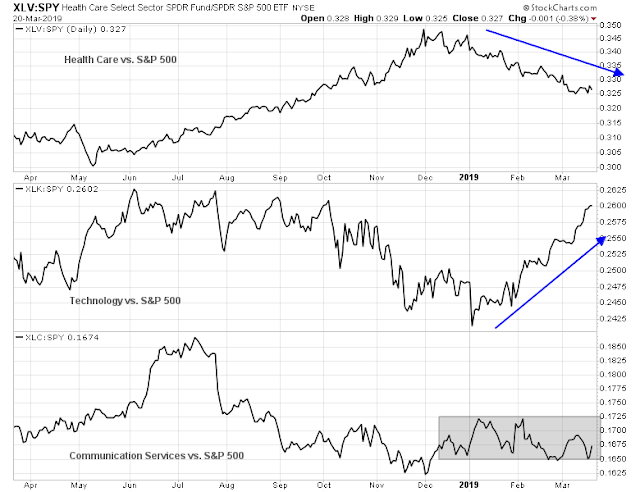 Consider the same analysis for the least favored sectors. Surprisingly, all have been range bound relative to the market, except for Consumer Staples, which has been in a relative downtrend this year. Be aware, however, that the relative performance of Financial stocks have been highly correlated to the shape of the yield curve. A steepening 2s10s yield curve has historically been favorable to the outperformance of this sector. 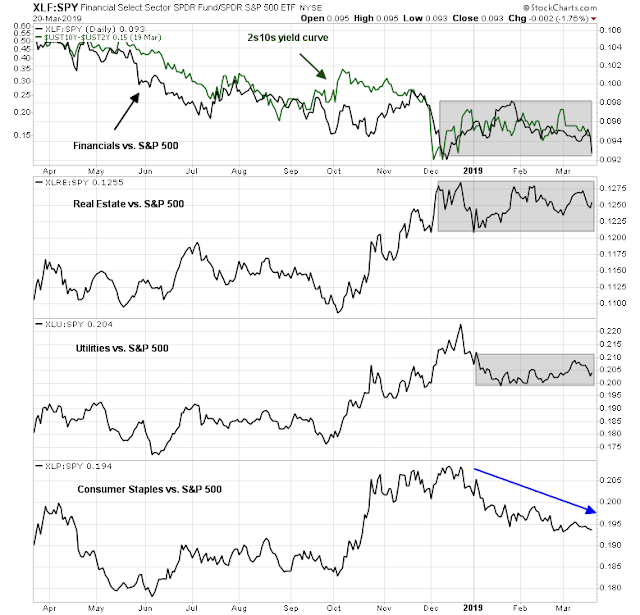 The analysis from RRG charts also supports the results of this analysis. Technology, Industrials, and Communication Services are the leadership groups, while defensive sectors like Consumer Staples, Real Estate, and Utilities are lagging. 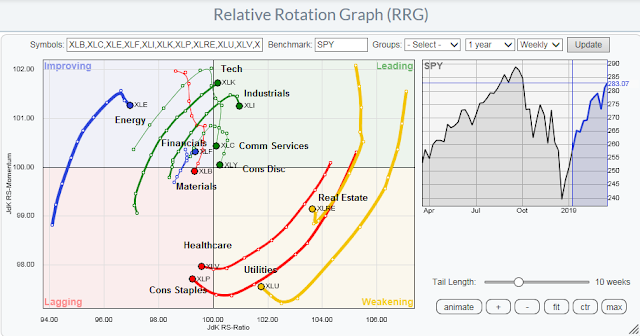 What sectors should you buy, or sell? That depends on your investment temperament..

Different strokes for different folks. You can pick your poison. As an alternative, a diversified approach of overweighting sentiment and price momentum (Technology), fundamental momentum (Health Care), and contrarian picks (Consumer Staples, Financials) will result in a portfolio with a more balanced market beta.