(Chinese) blood in the streets? – Humble Student of the Markets

The worries about China ebbs and flows. The latest BAML Fund Manager Survey shows that China fears are at flood levels again. 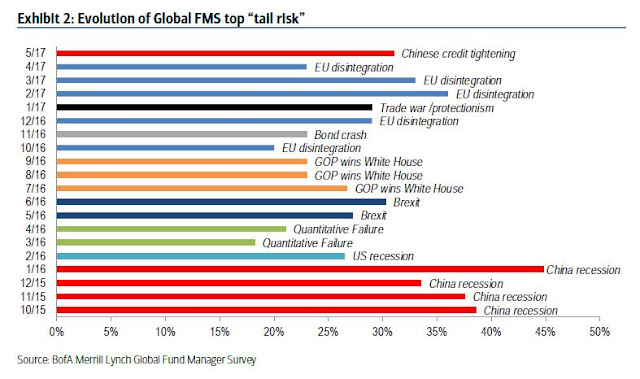 Indeed, developments such as the inverted Chinese yield curve is creating a sense of peak anxiety. 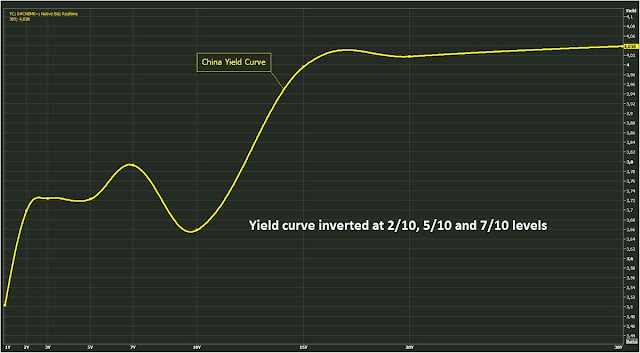 I recently highlighted analysis indicating that China fears are overblown (see Are the Fed and PBoC taking away the punch bowl?). Bloomberg Asian economist Tom Orlik observed that, despite the crackdown on credit, there are no signs of an imminent downturn: “Credit is down but land sales and profits are up – businesses and local governments still have funds to work with.” 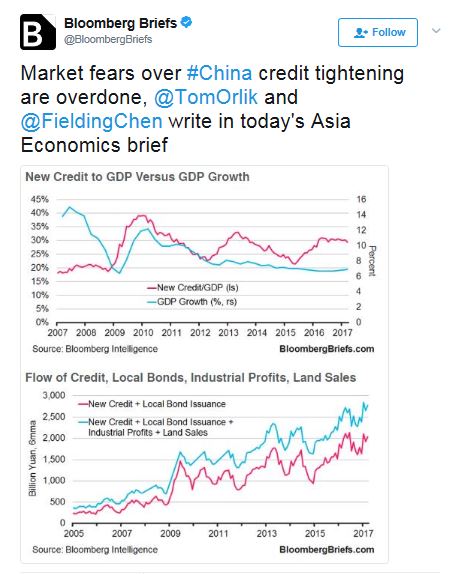 Investors should relax! The slowdown was policy induced, and policy can (and will) be reversed should the economy shudder, especially ahead of the 19th Party Congress later this year.

China has suffered enough pain. It looks like its near-term outlook is turning up again.

I am seeing multiple independent analysis indicating China is at the maximum point of pain. Here is UBS with an analysis of China’s past credit impulse cycles. 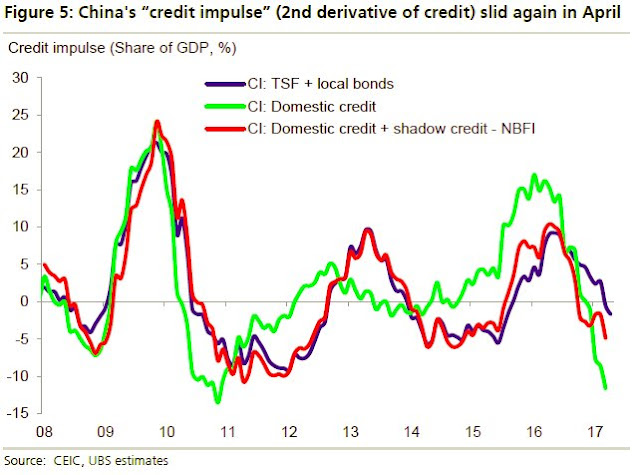 Nautilus Research observed China through the iron ore price prism and concluded that the current episode of credit tightening is nearing an end. 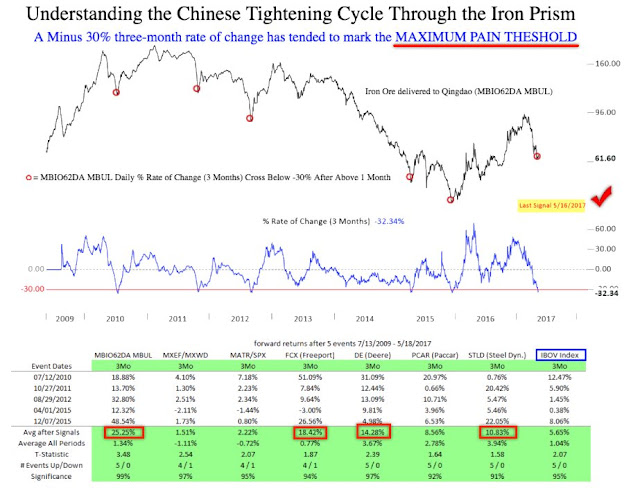 A glance at the stock market in China and the markets of her major Asian trading partners show that the markets are starting to anticipate a turnaround. The first sign that the Chinese credit slowdown was nothing to worry about was the weakness in stock prices was contained in China while other Asian markets remained in uptrends. Now, the Shanghai Composite is trying to bottom and possibly turn upwards. The only blemish in the Asian markets has been commodity sensitive Australian stocks, which is currently testing a support level. 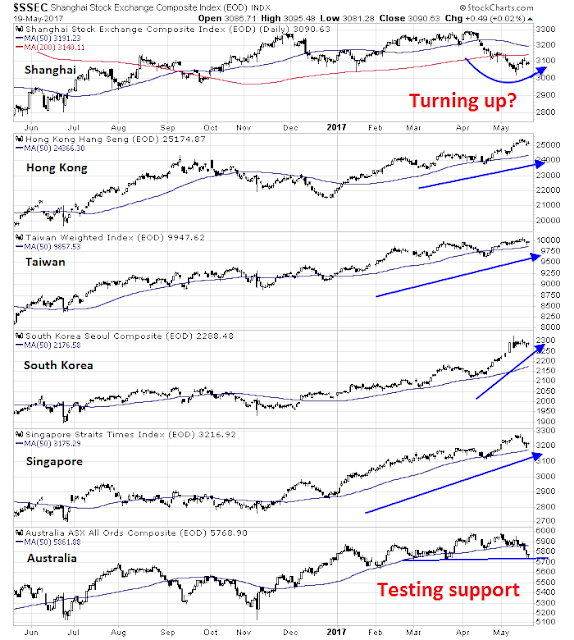 China has been a major source of demand for raw materials, and the commodity markets have bottomed and may be turning up. One of the key technical developments to watch is whether industrial metals and the CRB Index can rally about their downtrend lines. 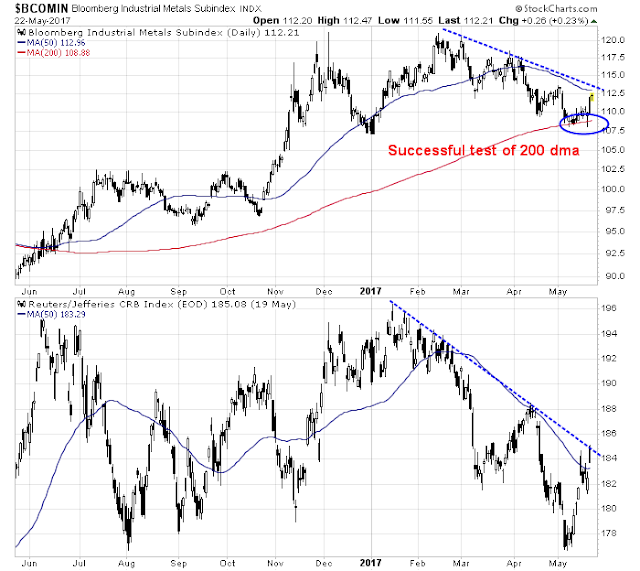 This brings up to our trade setup of a rotation into resource extraction sectors. As the chart below shows, the USD has been weakening, aided in part by political turmoil in Washington. As the USD tends to be inversely correlated with commodity prices, USD weakness creates a tailwind for natural resource stocks. Already, we can see that the relative performance of gold stocks tracing out a bottom. The other stocks in this sector, namely energy and mining, remain in relative downtrends in both the US and Europe. 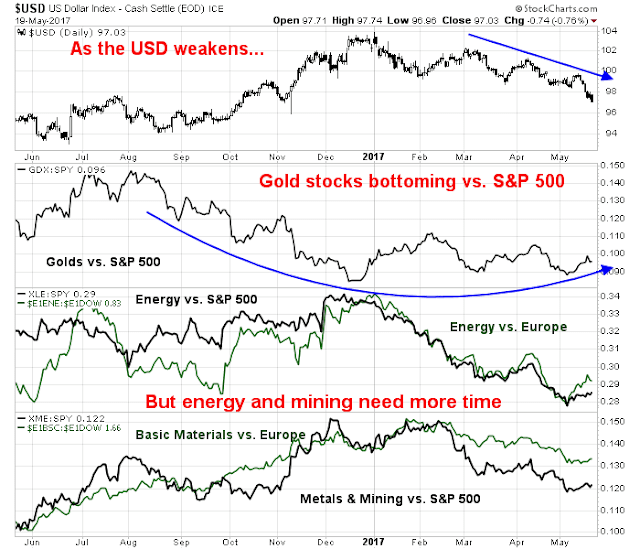 Chinese blood is running in the streets. This may be the time to start accumulating long positions in gold, energy, and mining stocks in anticipation of better performance in the near future.

2 thoughts on “(Chinese) blood in the streets?”