To BAT or not to BAT? Trump’s tax reform dilemma – Humble Student of the Markets

As the market awaits the FOMC decision and statement this week, there are a number of other critical market moving events to watch for. The Trump White House is expected to release its “skinny budget” this week, which may contain some broad outlines of the tax reform package. In addition, Angela Merkel’s White House visit Tuesday could bring important news on the trade front.

Donald Trump came into office promising a series of tax cuts and offshore cash repatriation incentives for Wall Street. But tax cuts have to be offset with either revenue increases or spending cuts. Trump adviser Gary Cohn recently stated on CNBC that the White House is aiming for to be revenue-neutral over a 10-year period. As this chart from Morgan Stanley shows, this level of fiscal stimulus is highly unusual at this point of the economic expansion. 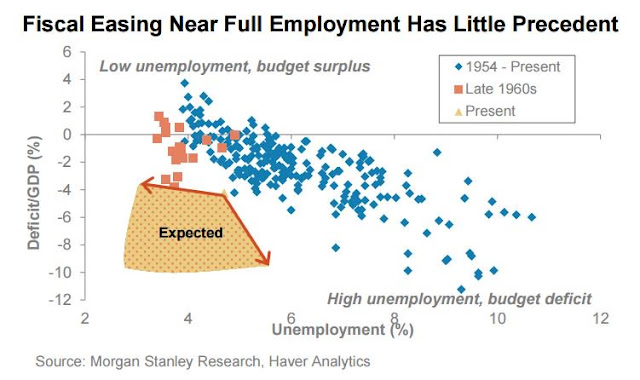 The main strategy for paying for the many of the proposed tax cuts is the imposition of a Border Adjustment Tax (BAT), which will penalize imports while encouraging exports. The BAT proposal, however, is likely to run into a number of major objections from America’s largest trading partners.

Those objections have come from Canada, which is America’s biggest customer, and from Germany, the sixth largest (chart via CNN Money). 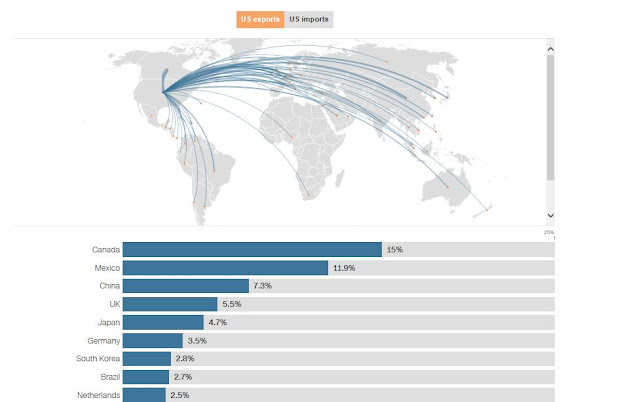 Last week, Canadian prime minister Justin Trudeau spoke at a Houston energy conference and cautioned that a BAT would be bad for all parties (via Bloomberg):

A levy on goods imported to the U.S. would damage business on both sides of the northern border and could impede the growth of energy, automobile and steel industries that benefit from bilateral cooperation, Trudeau said at a press conference in Houston.

“A border adjustment tax would be bad not just for Canada but for the United States as well,” the prime minister told reporters Friday. “No two countries in the world have the close friendship, alliance, relationship and level of economic integration that Canada and the U.S. have.”

German chancellor Merkel is expected to be far less diplomatic than Trudeau.

Der Spiegel reported that Angela Merkel is expected to warn about a potential trade war if the US were to impose a BAT. Undoubtedly she will not only be speaking on behalf of Germany, but the rest of the European Union as well.

On her first visit with Trump, Merkel plans to be very open about her views on the tax plans. Her preparatory paper for the meeting states that she plans to call the punitive import measure a “protective tariff” and the tax relief for American exports a “export subsidy.” She views both as being hostile acts that could trigger a trade war.

If none of that bears fruit, the Chancellery has begun reviewing ways it could strike back at the U.S. One idea would be to incrementally increase duties on American imports. Agreements reached within the World Trade Organization framework provide enough maneuvering room to allow for that. Another possibility would be to allow German companies to write off the U.S. import tax on their German tax declarations, thus compensating them for their competitive disadvantage.

Can a tax reform legislation that includes a BAT make it through Congress over the objections of America’s biggest customers?

Here is the clincher. The CEO of JC Penney recently stated in CNBC interview that a border tax would raise its effective corporate tax rate from 34% to 170%:

When asked if it was possible to operate in the black if the proposal goes into effect as written, Ellison said simply, “It will be very difficult. In the short run, virtually impossible.”

“It takes our tax structure, as an example, from roughly a 34 percent corporate tax to over 170 percent,” he explained. “So that gives you an idea of the financial impact to a company like J.C. Penney. And that’s very consistent with other companies, companies like Best Buy, Target, Kroger, Wal-Mart — I mean, you name it, we’re all in this same precarious position because we don’t have a manufacturing capacity that exists in the United States.”

Such a proposal amounts a decision to carpet bomb the retailing industry. Either retailers have to go out of business, or prices that consumer pay would have to go up – a lot. Either way, employment in that sector would shrink.

For some perspective, here is a comparison of employment in retailing compared to manufacturing. I doubt that the Republican rank-and-file in Congress have the stomach to devastate the retailing industry like that, especially as it looks ahead to mid-term elections. 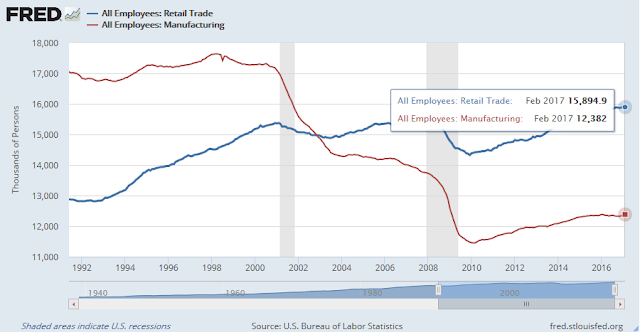 In all likelihood, either the tax cuts proposals will get watered down considerably, or Trump will opt for a “damned the torpedoes” approach and try to pass the tax cuts without any offsetting tax revenue. In the former case, stock prices will fall due to disappointment as much of the tax cuts have been priced in. In the latter, expect an inflationary boom and blow-off before the Fed responds with a series of rapid rate hikes that crash the economy and the market.

Be prepared, and pick your poison.

3 thoughts on “To BAT or not to BAT? Trump’s tax reform dilemma”