The market has spoken! – Humble Student of the Markets

Mid-week market update: Today’s market action should be a lesson to me to change model rankings based on overnight futures prices, which trades in a thin and volatile market (see What now?). To set the record straight, the Trend Model did not move to a neutral, or risk-off reading based on today’s market action. The change last night was based on ES futures falling 3-4% at the time of writing.

One common refrain made by politicians who concede elections is, “The people have spoken!” In this case, the market has spoken and it has decided to adopt the bullish view that Trump is a reflationary president, rather than the bearish view of Trump the protectionist. This interpretation was made evident by the rally in the cyclically sensitive industrial metals, even as gold prices fell. 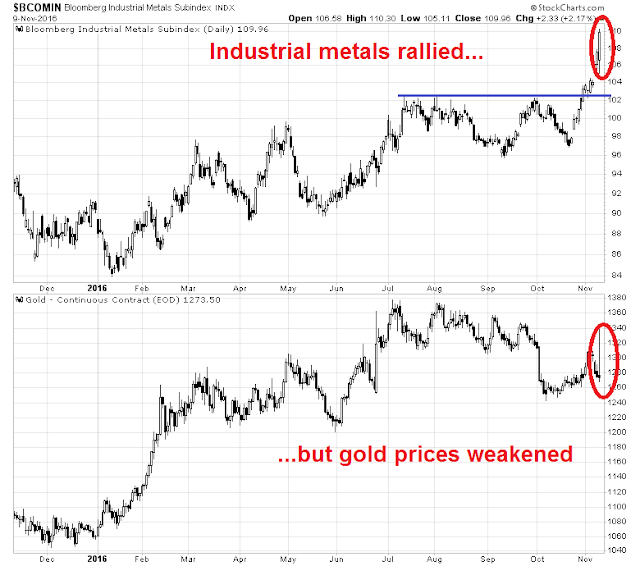 From a technical viewpoint, the stock market’s behavior is showing a path to an uber-bullish outcome. As the chart below shows, the market is showing the combination of a fear unwind, indicated by the normalization of the VIX term structure from an inverted state, and two days where TRIN has dipped below 0.50, which is a signal of a buying stampede. 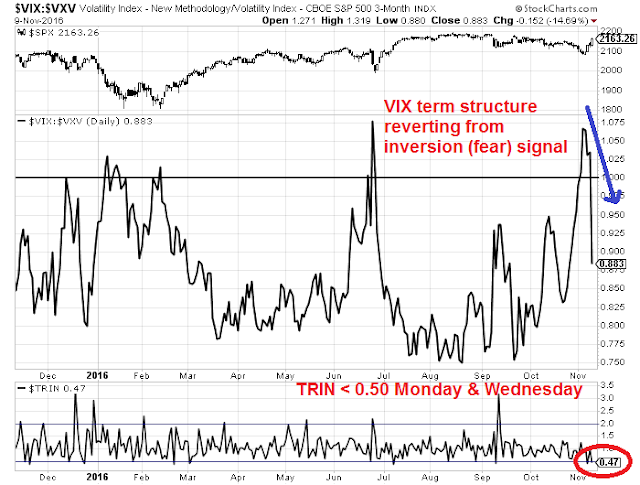 Such momentum have either resolved themselves into periods of extended bullish momentum, or fizzled out within a few days.

I went back to 2008 and looked at past episodes where such circumstances have repeated themselves. In 2015, TRIN fell below 0.50 while the VIX term structure was normalizing. The market rose for two days and stalled. 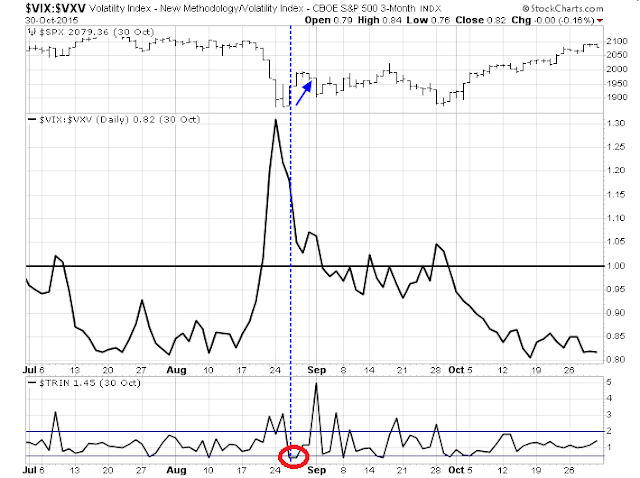 In 2014, the continued to advance for ten days after the signal. 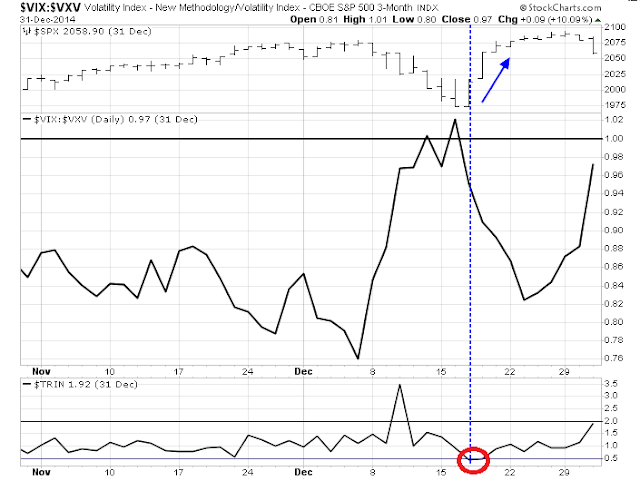 In 2013 and late 2012, stock prices continued to rise for quite some time after the two signals. 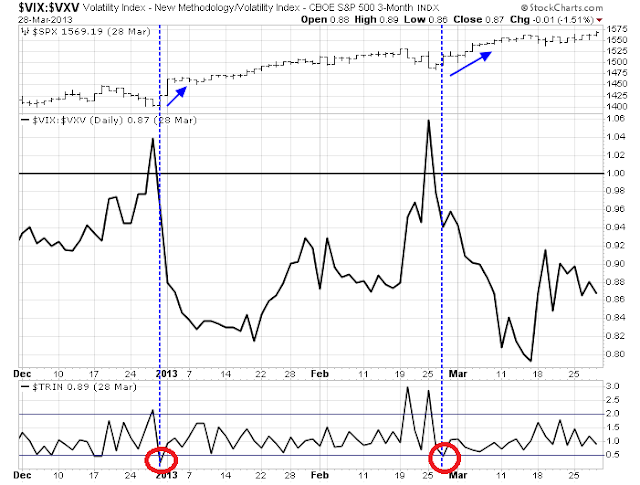 There were several instances of these signals in 2011. Most stalled within a few days, but the last one in October marked the start of a sustained advance in stock prices. 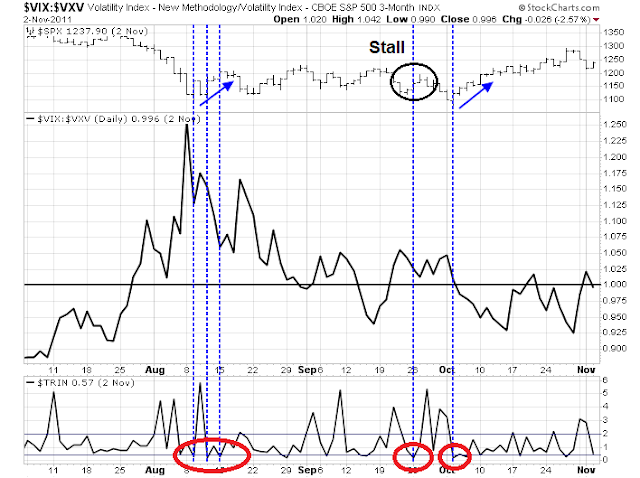 In 2010, the market stalled after the signal. 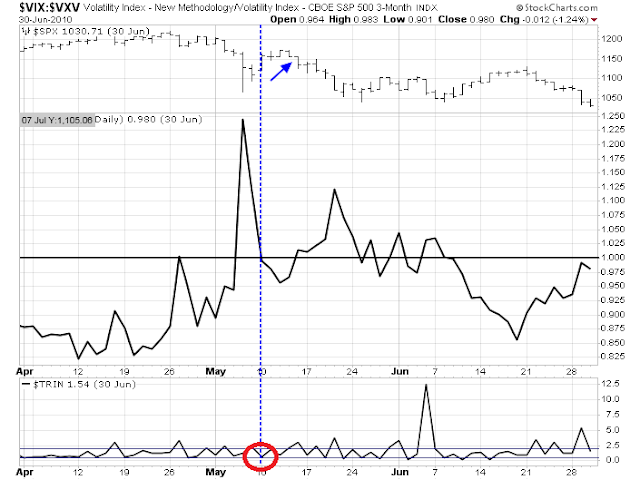 The market bottom in 2008 and 2009 saw several instances of this signal. Some were decent trading signals with advances that lasted for about a week. More importantly, the market saw such a signal when it made its possible generational bottom in March 2009. 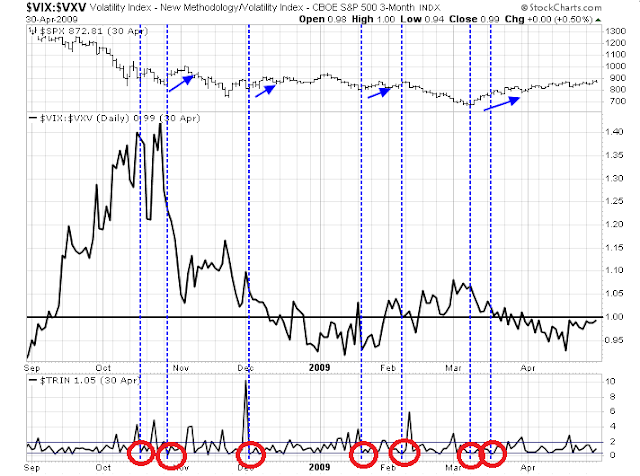 So where does that leave us? The historical evidence indicates that the combination signal of buying stampedes as fear fades yields sustainable advances about one-third of the time. One way is to trade these episodes is to get long, but with tight trailing stop losses.

As price momentum is the main component of these advances, there is another possible buy signal that the market could be setting us up for, namely the Zweig Breadth Thrust (see Bingo! We have a buy signal!). Steven Achelis at Metastock explained the indicator this way:

As the chart below shows, the ZBT Indicator (second bottom panel, bottom panel a real-time estimate) moved off its oversold level last Friday, which was day 1. The market therefore has 10 trading days to get the indicator up to 61.5%, which is not an easy task. Readers who want to follow along at home can use this link to get a real-time update. 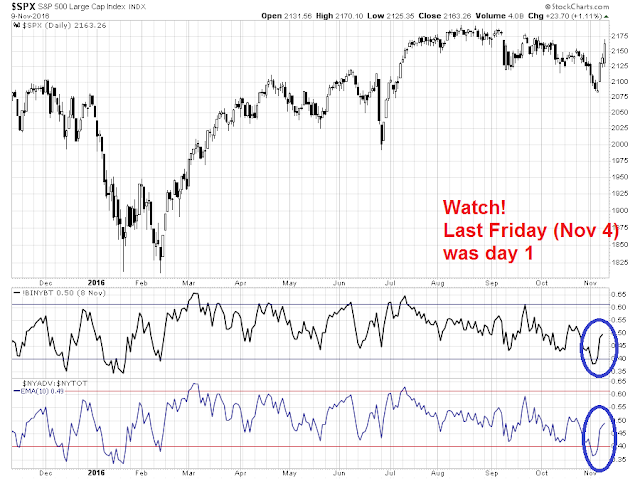 Should we see an actual ZBT buy signal, there will undoubtedly be lots of skeptics as the market will be challenging or breaking out to new highs. Many traders will think that it will be too late to be buying. However, momentum thrusts are funny that way, as their strength can extend a lot further than you think.

My inner investor remains constructive on equities. My inner trader was fortunate not to get stopped out of his long positions at the open this morning. He remains long equities.

7 thoughts on “The market has spoken!”