The Federal Reserve has spoken (see FOMC September statement). With three dissenting votes on the FOMC, a December rate hike is more or less baked in. The Fed will take a gradual approach to rate hikes, with the median “dot plot” forecasting a December rate hike and two more in 2017. 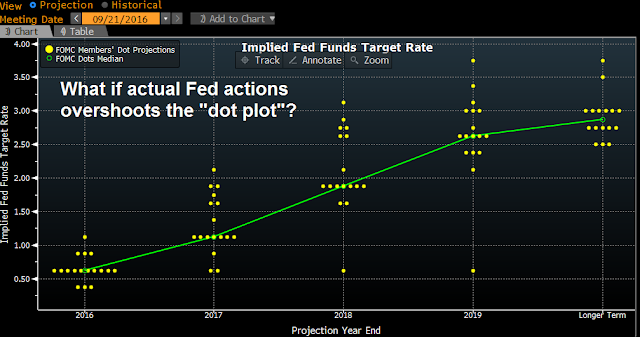 While the market doesn’t really believe in the “dot plot” projections anymore, as actual action has consistently been below projections. This time may be different. There is a case to be made that the market is poised for a nasty upside surprise in 2017, where the pace of rate normalization will be higher than expected. Should such a scenario unfold, it would be very bearish for stock prices.

In the press conference, Janet Yellen stated that she expects that inflation will rise to the Fed’s target rate on 2-3 years. What if it rises more quickly?

The top panel of the chart below comes from Callum Thomas, who pointed out that the breadth of global (headline) inflation surprise has been rising dramatically. This may be a surprise to investors as major central banks like the ECB and BoJ have been struggling to get inflation to rise. The bottom panel of the chart, which shows the CRB Index and its 52-week rate of change, shows that major moves in headline surprise have historically been driven by commodity prices. 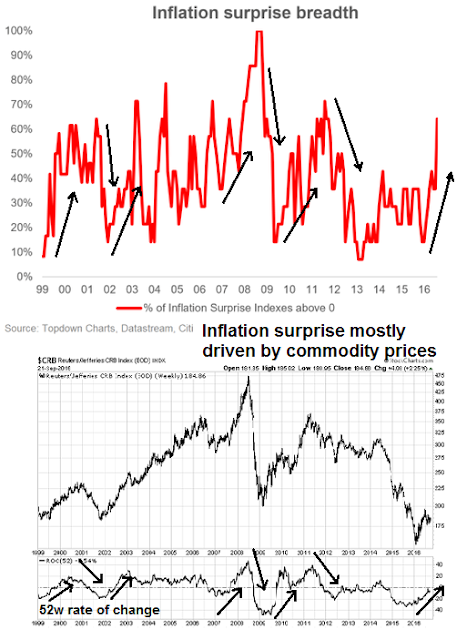 The US is not immune to this effect. The chart below shows Core PCE inflation (blue line), which is the Fed’s preferred inflation metric, and producer prices for all commodities (red line). As the chart shows, commodity inflation has tended to either lead or were coincidental with Core PCE, which indicates that major trend changes in commodity prices eventually feed into measures of core inflation. 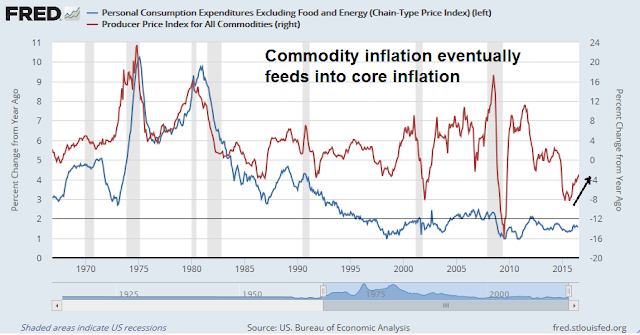 Another bearish factor for equity prices comes from Ed Yardeni, who believes the kind of inflation that is emerging is the unhealthy variety. Yardeni recently delved further into the factors behind the upward pressure on CPI:

There are also two kinds of inflation. There’s the kind that stimulates demand by prompting consumers to buy goods and services before their prices move still higher. The other kind of inflation reduces the purchasing power of consumers when prices rise faster than wages. That variety of inflation certainly doesn’t augur well for consumer spending.

During the 1960s and 1970s, price inflation rose faster than interest rates. The Fed was behind the inflationary curve. So were the Bond Vigilantes. However, wages kept pace with prices because unions were more powerful than they are today, and labor contracts included cost-of-living adjustments. Back then, the University of Michigan Consumer Sentiment Survey tracked rising “buy-in-advance” attitudes. Those attitudes remained particularly strong in the housing market through the middle of the previous decade. On balance, inflation stimulated demand more than weighed on it. Borrowing was also stimulated…

The variety of inflation that the US is experiencing isn’t the kind that stimulates economic growth. On the contrary, it has been led by rising rents, and more recently by rising health care costs. It is very unlikely that buy-in-advance attitudes cause people to rent today because rents will be higher tomorrow, or to rush to the hospital to get a triple-bypass today because it will be more expensive tomorrow! Higher shelter and health care costs are akin to tax increases because they reduce the purchasing power available for other goods and services.

In other words, the inflation forces that are pressuring prices upwards is not conducive to growth. Now imagine the following scenario. The Fed sees inflation edging upwards and responds with rate hikes. In addition, inflation pressure is the “bad” growth inhibiting variety. That combination would create a double whammy for the equity outlook.

Bridgewater also came out with a recent bearish research note indicating that Fed tightening during a deleveraging cycle would constitute a policy mistake:

“In nearly every case, the tightening crushed the recovery, forcing the central bank to quickly reverse course and keep rates close to zero for many more years,” the note said.

In those cases, markets have tended to tank, recoveries fade, and inflation drop.

More specifically, the average rate hike during a deleveraging “caused, over the next two years, a 16% drawdown in equities, a 2% increase in economic slack and a 1% fall in inflation.”

In conclusion, the Fed could be poised to raise rates in 2017 faster than the market expects. Should such a scenario unfold, the macro backdrop is equity bearish and could signal the start of a bear market next year.

My inner investor regards this potential development as a risk only. While such a scenario represents a substantial risk, he is not willing to take any investment action based on the speculation of possible developments on the inflation front and the subsequent FOMC reaction (yet).