The Art of the Deal, Phase One edition – Humble Student of the Markets

The markets began to take on a risk-on tone on Friday when the news that American and Chinese negotiators had “made headway on specific issues and the two sides are close to finalizing some sections of the agreement”. Bloomberg went on to report today that the text of the “phase one” agreement is basically done, and the agreement will be signed when Trump meets Xi at the APEC summit in Chile in mid-November:

China said parts of the text for the first phase of a trade deal with the U.S. are “basically completed” as the two sides reached a consensus in areas including standards used by agricultural regulators.

The Saturday comments followed a call Friday with Chinese Vice Premier Liu He, U.S. Trade Representative Robert Lighthizer and Treasury Secretary Steven Mnuchin. The trade negotiators “agreed to properly resolve their core concerns and confirmed that the technical consultations of some of the text agreement were basically completed,” China’s Ministry of Commerce said in a statement on Saturday. 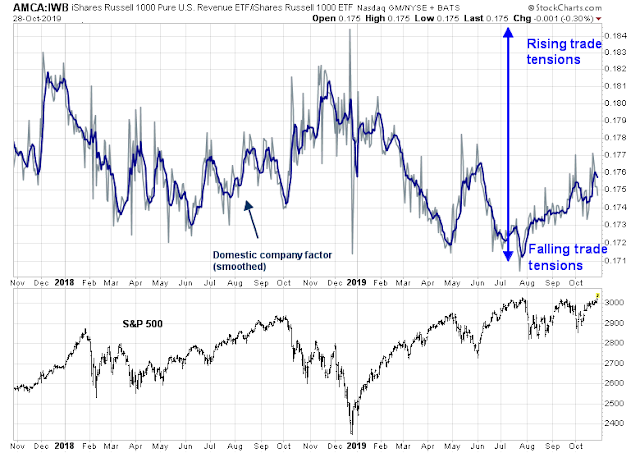 With our trade war factor in roughly neutral territory, we try to answer the following questions:

What’s on the table?

There are numerous press reports of what has been discussed, and the degree of agreement. Reuters reported that China has offered agricultural purchases that start at the $20bn, which represents pre-trade war levels, and far below the $40-50bn touted by Trump:

One of the sources briefed on the talks said that China’s offer would start out at around $20 billion in annual purchases, largely restoring the pre-trade-war status quo, but this could rise over time. Purchases also would depend on market conditions and pricing.

In return, Bloomberg reported the US has agreed to suspend the implementation of the tariff increase originally scheduled for October 15, and the mid-December tariffs increase is still up for discussion:

A pause in the tariff escalation, but not an end of them. Trump agreed to forego an Oct. 15 increase to 30% from 25% in the tariffs collected on some $250 billion in imports from China. But the 25% tariffs haven’t gone away. And neither has the 15% tariff on a further $110 billion in goods that took effect Sept. 1, nor the threat that another $160 billion in goods will be hit Dec. 15. There is an expectation the Dec. 15 tariffs, which would hit popular consumer items like smartphones and toys, won’t take effect. But a lot of tariffs remain in place.

CNBC reported that trade czar Peter Navarro has been actively opposed to the deal, but he has little support among American negotiators. Navarro’s objections is a hint of what is not on the negotiating table in “phase one”:

Navarro has taken particular issue with the shelving of certain protections for intellectual property and technology that appeared in earlier versions of the deal, according to these three sources, who are in regular contact with Trump and the administration. Navarro has urged Trump to force China to recommit to previous promises on IP protection or walk away from a deal.

As announced, the deal would not outlaw China’s subsidizing state-owned enterprises. It would not open China’s economy to all sectors and industries, as the Trump administration had been pushing. And it would not require China to codify the deal into the law — a focal point in talks that became a dealbreaker for Xi in May.

Bloomberg further reported that the Chinese have agreed to concessions on intellectual property and an agreement on currency stability, which may have been enough to placate Navarro:

Concessions on intellectual property. From the beginning, the administration’s big target in its “Section 301” fight against China has been forcing an end to what the U.S. sees as a systematic and state-backed Chinese theft of American intellectual property. Included in the deal being finalized are commitments by China. But they are largely actions China has taken already. It passed new IP and foreign investment laws earlier this year that address the issue. It has also already set up new IP courts to prosecute cases. As always with China, the key is whether authorities enforce the laws.

Currency commitments. As members of the Group of 20 both the U.S. and China have agreed not to manipulate currency markets for economic advantage. Now they will have a bilateral commitment to do so that may lead to the U.S. removing the “currency manipulator” label it slapped on China in August.

What about the all-important agricultural purchases? Here is how much soybeans the Chinese have bought from the US (orange line). That`s right, it`s virtually nothing, and roughly in line with what they bought last year. 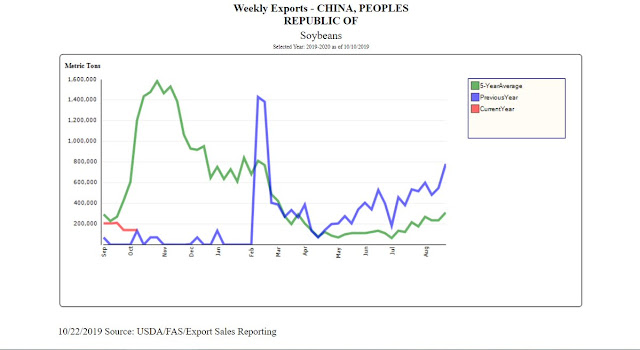 Moreover, Beijing wants to only commit to buying soybeans based “on market conditions and pricing”. As the following chart shows, Brazilian soybean prices are competitive with US beans, and American farmers will have to compete in the global markets to get China’s business. 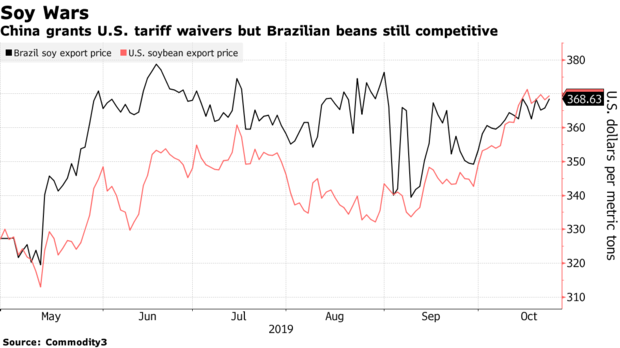 What about “phase two”?

What about “phase two”? Hu Xijin, the editor of China’s official news organ Global Times, tweeted that a “phase one” deal was likely, but he didn’t hold out much hope of progress for further agreement. 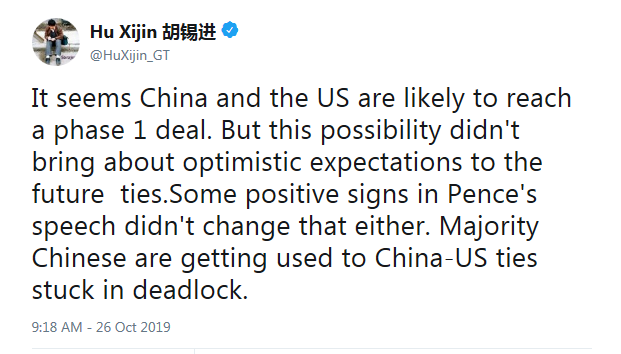 If what we have heard so far from news reports is correct, then what is on the table represents an uneasy truce between both sides. China promises to buy $20 bn of agricultural products, which is roughly the pre-trade war level, and it will ramp up to $40-50 bn some time in the future. In return, the US suspends the October 15 tariff increase, and possibly the December 15 increase. Each is trying to retain negotiating leverage, either in the form of more agricultural purchases, or the suspension or rollback of tariffs. This agreement is designed to alleviate the short-term pain felt by each side. The Chinese desperately need more pork imports, and the soybeans needed to feed its pig population. The American side needs to stem the pain felt by its farmers.

Current expectations are the “phase one” agreement will be signed when Trump meets Xi at the APEC summit in mid-November.

If this limited deal were to be signed, what are the market and political impacts? The initial market reaction has been a relief rally, as the risk of further trade war escalation diminishes. Moreover, any suspension of the tariffs scheduled for December 15 removes a threat to US consumer spending, as most of those tariffs would hit consumer goods, and just ahead of Christmas.

Longer term, however, the market and political impacts are less certain.

Former Morgan Stanley Asia chair Stephen Roach derided the deal as nothing more than a smoke and mirrors exercise:

And yet the phase one deal announced with great fanfare is a huge disappointment. For starters, there is no codified agreement or clarity on enforcement. There is only a vague promise to clarify in the coming weeks Chinese intentions to purchase about $40-50 billion worth of US agricultural products, a nod in the direction of a relatively meaningless agreement on currency manipulation, and some hints of initiatives on IP protection and financial-sector liberalization. And for that, the Chinese get a major concession: a second reprieve on a new round of tariffs on exports to the US worth some $250 billion that was initially supposed to take effect on October 1.

Far from a breakthrough, these loose commitments, like comparable earlier promises, offer little of substance. For years, China has long embraced the “fat-wallet” approach when it comes to defusing trade tensions with the US. In the past, that meant boosting imports of American aircraft; today, it means buying more soybeans. Of course, it has an even longer shopping list of US-made products, especially those tied to telecommunications equipment maker Huawei’s technology supply chain.

The broad details of the agreement. (as reported in the press) does not address the bigger underlying questions:

The real problem with the phase one accord is the basic structure of the deal into which it presumably fits. From trade to currency, the approach is the same – prescribing bilateral remedies for multilateral problems. That won’t work. Multilateral problems require solutions aimed at the macroeconomic imbalances on which they rest. That could mean a reciprocal market-opening framework like a bilateral investment treaty or a rebalancing of saving disparities between the two countries that occupy the extremes on the saving spectrum.

Stripped to its core, the “phase one” agreement amounts to $20 bn in Chinese agricultural purchases in return for the suspension of some planned tariff increases. While there is some language about intellectual property protection and currency stability, they amount to nothing more than promises, and their enforcement depend on future Sino-American relations.

If enacted, the “phase one” deal as outlined is likely to only formalize a ceasefire in the trade war, and does not represent any substantive progress. Even if the deal were to be concluded with only planned tariff suspensions, and no tariff rollbacks, Trump is likely to attract criticism from both sides of the aisle in Washington. This will not help his standing in light of his political position when he is under impeachment pressure. He will need members of his own party to support him, and what amounts to a cave at the negotiation table is not helpful for Republican support.

Bottom line: The good news is both sides are talking, and the chances of further escalation in the trade war is receding. If I am correct in my assessment of a global cyclical upturn (see An upcoming seismic shift in factor returns), then the market’s expectations of trade war risk should also fade over time. The bad news is that the Sino-American trade, strategic, and diplomatic relationship has been permanently damaged. We are unlikely to see any trade peace, regardless of who wins the White House in 2020.