Inequality and the genetic lottery: Two views – Humble Student of the Markets

The topic of inequality has been in the news in the wake of President Obama’s State of the Union speech, which focused on that very issue. I refer readers to my previous post on this subject (see Inequality: Does it matter?) where I concluded that it is the equality of opportunity that matters, not so much income or wealth inequality itself.

In this post, I have messages for both the Left and the Right. You probably won the genetic lottery, but you didn’t realize it. It’s time to take steps to correct some of those differences.

The rich getting richer

Let’s start with the popular perception of inequality about the rich getting richer. There is no question that the owners of capital have derived much of the gains over the last few decades. As Rex Nutting at Marketwatch pointed out, wages haven’t budged very much since 1979: 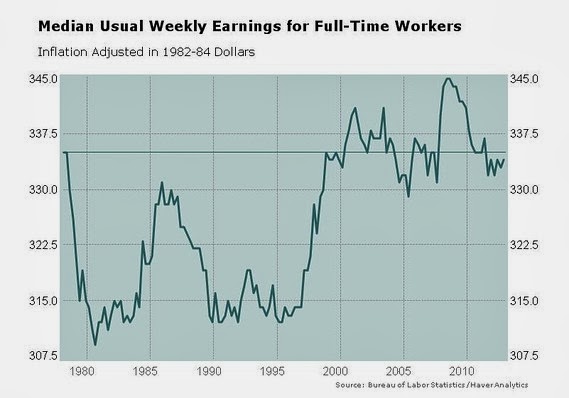 On the other hand, productivity has skyrocketed in the same period: 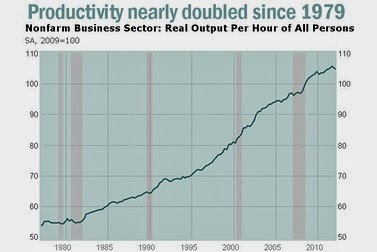 It is clear from this simple analysis of who won and who lost. I feel their pain. Down that road lies social unrest.

Why investors should be concerned

As an investor, I am concerned about inequality because it retards growth and creates social problems in a society. Andrew Berg and Jonathan Ostry of the IMF wrote a paper entitled Inequality and unsustainable growth: Two sides of the same coin? Here are their primary findings:

We found that high “growth spells” were much more likely to end in countries with less equal income distributions. The effect is large. For example, we estimate that closing, say, half the inequality gap between Latin America and emerging Asia would more than double the expected duration of a “growth spell”. Inequality seemed to make a big difference almost no matter what other variables were in the model or exactly how we defined a “growth spell”. Inequality is of course not the only thing that matters but, from our analysis, it clearly belongs in the “pantheon” of well-established growth factors such as the quality of political institutions or trade openness.

In addition, Albert Edwards (via FT Alphaville) raised his concerns about US inequality, showing that US inequality has reached new heights. 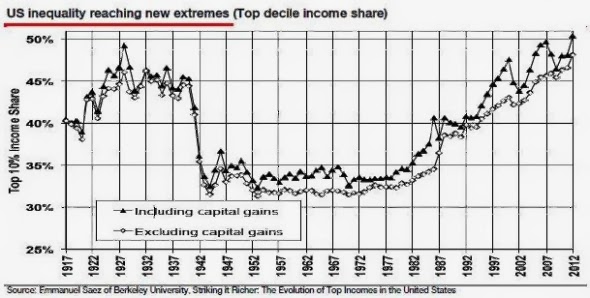 He went on to show that inequality is highly correlated with health and social problems: 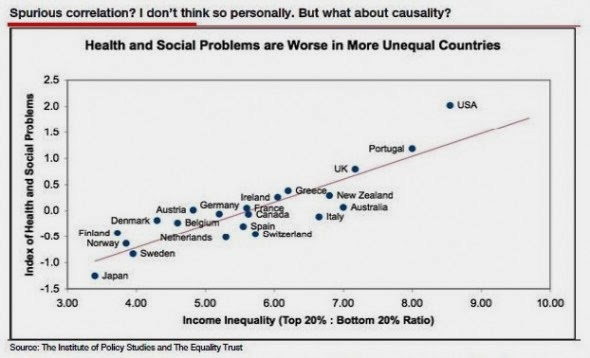 Why would you want to put your money in a country with unsustainable growth and rising health and social problems?

Josh Brown wrote that the wealth have a reflexive reaction to the mention of inequality:

Business-minded people hear the word “inequality” and their reproductive organs crawl back up inside their bodies reflexively.

The “I Word” smacks of socialism and it runs counter to everything we learn in free-market capitalism and private enterprise. The way it’s supposed to work is that the winners are separated from everyone else because of how smart, hard-working and, yes, occasionally lucky they are.

To the likes of Tom Perkins, who, in a fit of hyperbole, compared the persecution of the rich to Nazism, I would first point out Howard Marks‘ latest letter in which he attributed the role of luck in his own success.

Buffett’s mention of “people who say, ‘I did it all myself'” reminds me of one of President Obama’s reelection campaign speeches, which included a comment that became a lightning rod: “If you’ve got a business – you didn’t build that. Some else made that happen.”

His remark serves quite poorly when taken on its own. It suggests he thinks that there’s no such thing as individual success, only group accomplishments. It denies the efficacy of hard work and grit. In short it reflects a very un-American view of success.

Marks went on to elaborate:

Clearly Obama omitted a few key words from those last two sentences, perhaps assuming his listeners would carry them over from those that went on before. The addition of just four words (Italicized below) would have made his message more palatable: “If you’ve got a business – you didn’t build that alone. Somebody else provided assistance that made that happen.”

In other words, no one is self-made. Someone was there to assist you along the way. Marks went on to say that success is related to winning the genetic lottery in some way:

It seems like than a coincidence that not only was Bill Gates born in 1955, but his Microsoft co-founder Paul Allen was born in 1953; Sun Microsystems founder Bill Joy and Scott McNealy were born in 1954; Steve Jobs and Eric Schmidt were born in 1955; and Steve Ballmer was born in 1956. Ten years earlier and there would have been no remote computer terminals for them to work at in high school and college; ten years later and the kids born before them would have beat them to the “new, new thing.”

The bottom line is simple: it’s great to be in vanguard of a new development. Talent and hard work are essential, but there’s nothing like getting there early and being pushed ahead by the powerful trends in demographics and test that follow.

In other words, there are no self-made men. Hard work is certainly one component, but luck and the right supports systems matter too. In my last post (Inequality: Does it matter?) I pointed out Alan Kreuger’s work where the success of the offspring depends a lot on the social position of the parents:

Alan Kreuger dubbed this the Great Gatsby Curve, shown in the chart below. The x-axis depicts the Gini coefficient, which is a measure of income inequality (the higher the number, the more unequal). The y-axis shows the correlation of wealth between generations as a measure of economic mobility (the higher the number, the more likely an offspring will have the similar income level as his or her parents). 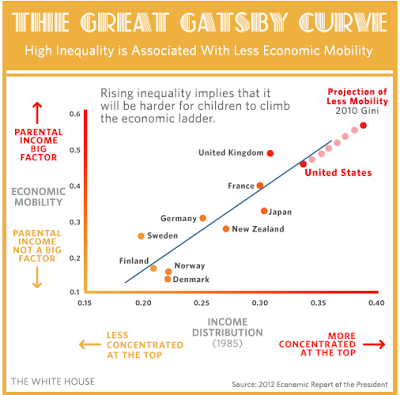 In other words, people won the genetic lottery and they didn’t even know it. Would Bill Gates be where he would be today if he had been born in 1955 (as per Howard Marks) but he was a poor kid in the slums? It is theoretically possible, but the odds were stacked against him. Success no doubt depends on talent and skill, but it also depends on winning the genetic lottery and having access to the right education in the right schools.

A recent paper entitled Marry Your Like: Assortative Mating and Income Inequality suggests that the affluent is well aware of the Great Gatsby Curve and choose their mates accordingly. In effect, they marry within their own class. Here is the abstract from the paper [emphasis added]:

In other words, many “self-made” Americans may not have been born to the super-rich, but they did come from middle-class or affluent families who had the resources to made sure that their kids had exposure to the right skill sets in order for them to succeed. The “shadow” Bill Gates who was born in the same year to parents in the slums would not have had the same chance to succeed.

At the heart of the inequality debate is the issue of “fairness”. Why should the children of the rich (or affluent) be able to cruise along while the children of the poor, who are just as smart or perhaps even smarter, struggle? Are we destined for an Upstairs, Downstairs world? That has been the contention of the Left in this debate.

Branko Milanovic, the Lead Economist at the World Bank research group, said in so many words the Left in developed countries won the genetic lottery but they didn’t even know it (my words, not his). The chart below shows who won and lost in the inequality race globally. The x-axis on the bottom splits the world population from the poorest on the left in subsistence economies to the richest on the right, while the y-axis shows the real income growth in PPP terms between 1988 and 2008.

In the thirty years spanning 1988 and 2008, the winners in the inequality race were the middle class in emerging economies, because of the effects of globalization, and the very rich, who engineered the globalization revolution. The losers were the very poor in subsistence economies, who weren’t able to benefit from  and the middle class in developed economies, who did not receive the benefits of the productivity gains (see Rex Nutting’s analysis above) in the last few decades.

Milanovic went on to show that the country that you were born matters a lot more now than the social class that you were born into. In effect, the Left of the developed world, who has been railing about inequality, won the genetic lottery and they didn’t even know it! 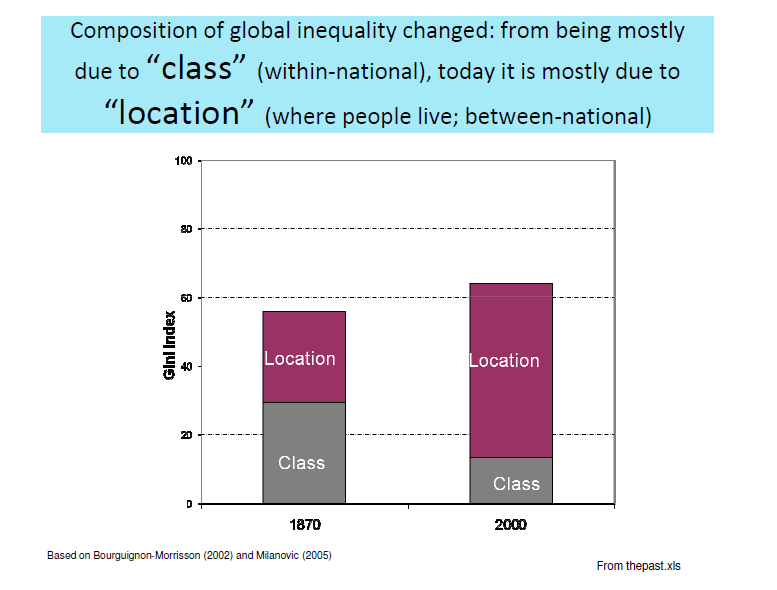 Are those on the Left who complain about inequality trying to suppress the fortunes of people in emerging market countries in order to protect their own privileged positions? Just take a look at this long, but worthwhile, video (via The Short Side of Long) about how economic growth in the past few decades have lifted billions out of poverty. Consider the effects of emerging market country growth in terms of rising life expectancy and better living standards. I have a variant on the adage:

Give a man a fish and he’ll eat for a day.
Teach a man how to fish…and he’ll want to buy a boat.

When he buys a boat, it has two effects. First, it raises his own productivity (which means growth). As well, his purchase means greater demand for boats and work of boat makers, which also raises growth. For a real-life example, the aforementioned video details the heart wrenching story of the African couple who scrimps and saves to buy a bicycle and how it raises the family’s productivity and financial circumstances.

As an investor, I care about inequality. It’s true that the rich are getting richer (local inequality). Local inequality matters because it retards the sustainability of growth. Globalization, which lessens global inequality, raises growth.

As a human being, I care about inequality from a social policy viewpoint because it’s natural to care about the society that I live in. I wrote before that what matters the most is the equality of opportunity and I stand by that assertion.

The solutions to inequality are fairly obvious, but politically difficult to implement. At a global level, the effects of globalization should serve to lessen the inequality of opportunity. How we manage the trade-offs is another matter. To close the global inequality gap, Milanovic concluded that either poor countries have to get richer or poor people have to move to rich countries (imagine millions of poor people from Botswana to China flooding into America). 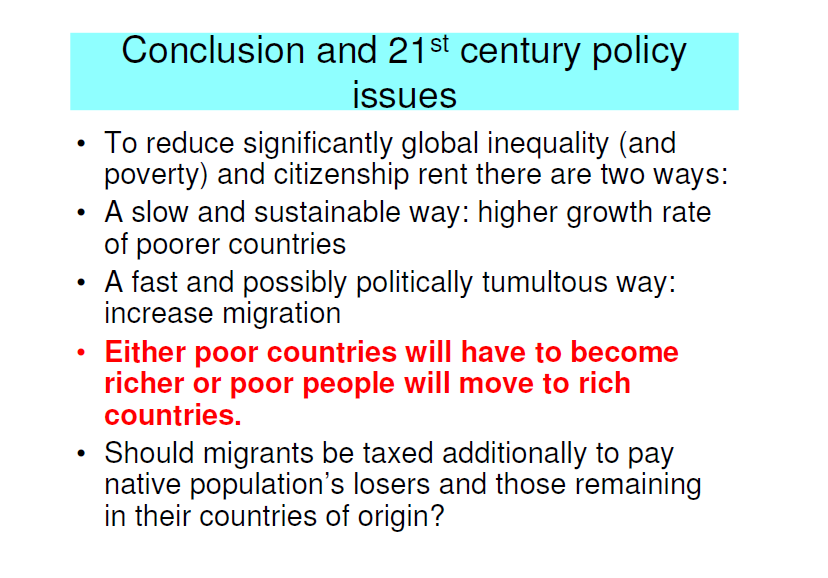 At a local level, it involves better access to education and (yes, *gasp*) tax reforms to reduce the entrenchment effects of inter-generational wealth transfer.

The details of implementation, both global and local, are way beyond my pay grade.